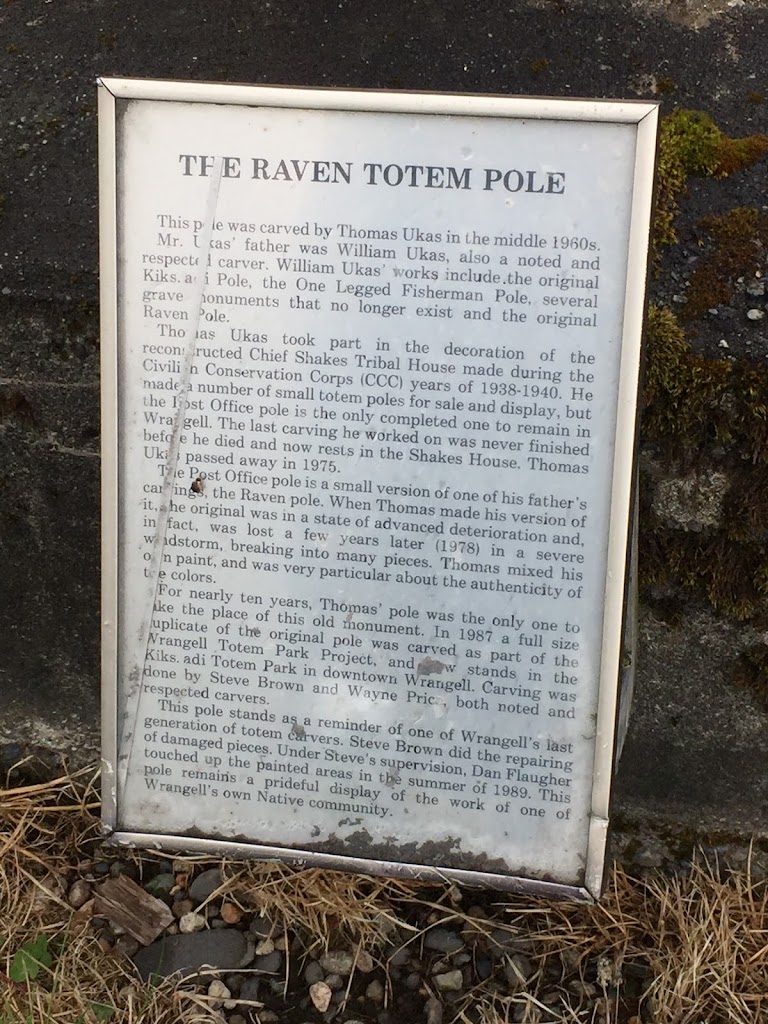 The Raven Totem Pole
This pole was carved by Thomas Ukas in the middle 1960s. Mr. Ukas' father was William Ukas, also a noted and respected carver. William Ukas' works include the original Kiks.adi Pole, the One Legged Fisherman Pole, several grave monuments that no longer exist and the original Raven Pole.
Thomas Ukas took part in the decoration of the reconstructed Chief Shakes Tribal House made during the Civilian Conservation Corps (CCC) years of 1938-1940. He made a number of small totem poles for sale and display, but the Post Office pole is the only completed one to remain in Wrangell. The last caving he worked on was never finished before he died and now rests in the Shakes House. Thomas Ukas passed away in 1975.
The post office pole is a small version of one of his father's carvings, the Raven pole. When Thomas made his version of the it the original was in a state of advanced deterioration and, in fact, was lost a few years later (1978) in a severe windstorm, breaking into many pieces. Thomas mixed his own paint, and was very particular about the authenticity of the colors.
For nearly ten years, Thomas' pole was the only one to take the place of this old monument. In 1987 a full size duplicate of the original pole was carved as part of the Wrangell Totem Park Project, and now stands in the Kiks.adi Totem Park in downtown Wrangell. Carving was done by Steve Brown and Wayne Price, both noted and respected carvers.
This pole stands as a reminder of one of Wrangell's last generation of totem carvers. Steve Brown did the repairing of damaged pieces. Under Steve's supervision, Dan Flaugher touched up the painted areas in the summer of 1989. This pole remains a prideful display of the work of one of Wrangell's own Native community.