The Battle of Brooklyn 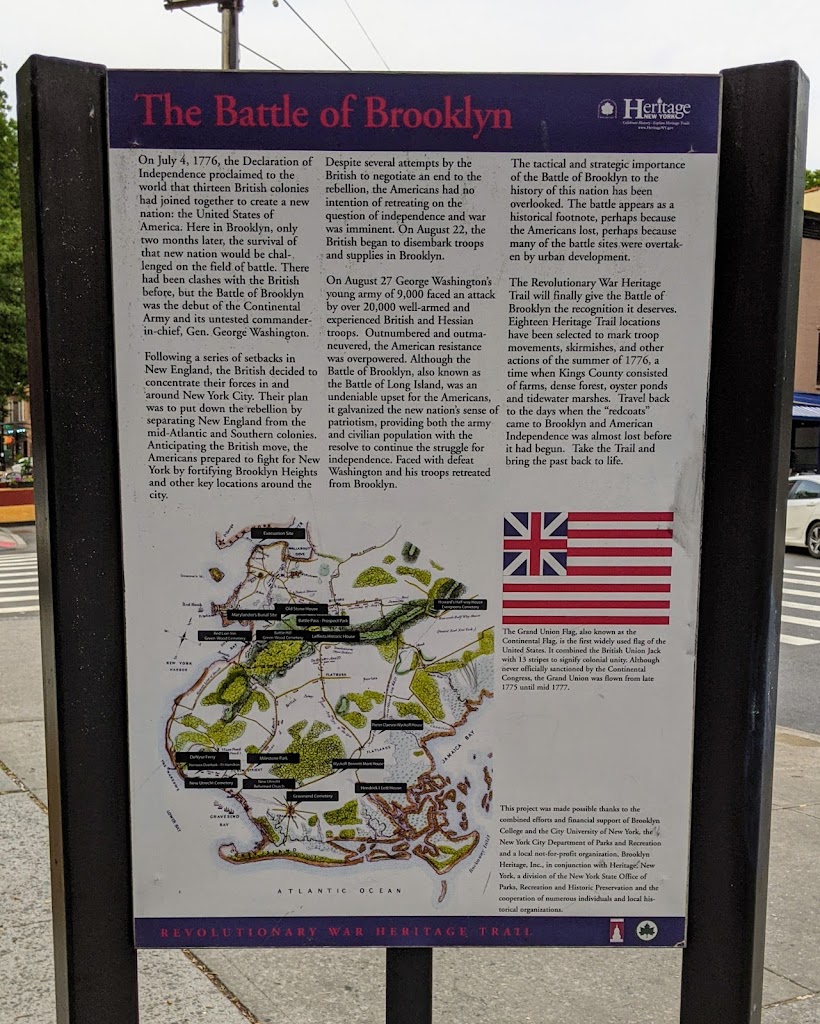 On July 4, 1776, the Declaration of Independence proclaimed to the world that thirteen British colonies had joined together to create a new nation: the United States of America. Here in Brooklyn, only two months later, the survival of that new nation would be challenged on the field of battle. There had been clashes with the British before, but the Battle of Brooklyn was the debut of the Continental Army and its untested commander-in-chief, Gen. George Washington.

Following a series of setbacks in New England, the British decided to concentrate their forces in and around New York City. Their plan was to put down the rebellion by separating New England from the mid-Atlantic and Southern colonies. Anticipating the British move, the Americans prepared to fight for New York by fortifying Brooklyn Heights and other key locations around the city.

Despite several attempts by the British to negotiate an end to the rebellion, the Americans had no intention of retreating on the question of independence and war was imminent. On August 22, British began to disembark troops and supplies in Brooklyn.

On August 27 George Washington's young army of 9,000 faced an attack by over 20,000 well-armed and experienced British and Hessian troops. Outnumbered and outmaneuvered, the American resistance was overpowered. Although the Battle of Brooklyn, also known as the Battle of Long Island, was an undeniable upset for the Americans, it galvanized the new nation's sense of patriotism, providing both the army and the civilian population with the resolve to continue the struggle for independence.  Faced with defeat Washington and his troops retreated from Brooklyn.

The tactical and strategic importance of the Battle of Brooklyn to the history of this nation has been overlooked. The battle appears as a historical footnote, perhaps because the Americans lost, perhaps because many of the battle sites were overtaken by urban development.

The Revolutionary War Heritage Trail will finally give the Battle of Brooklyn the recognition it deserves. Eighteen Heritage Trail locations have been selected to mark troop movements, skirmishes, and other actions of the summer of 1776, a time when Kings County consisted of farms, dense forest, oyster ponds and tidewater marshes. Travel back to the days when the "redcoats" came to Brooklyn and American Independence was almost lost before it had begun. Take the Trail and bring the past back to life.

The Grand Union Flag, also known as the Continental Flag, is the first widely used flag of the
United States. It combined the British Union Jack with 13 stripes to signify colonial unity. Although never officially sanctioned by the Continental Congress, the Grand Union was flown from late 1775 until mid 1777.

This project was made possible thanks to the combined efforts and financial support of Brooklyn College and the City University of New York, the New York City Department of Parks and Recreation and a local not-for-profit organization, Brooklyn Heritage, Inc., in conjunction with Heritage New York, a division of the New York State Office of Parks, Recreation and Historic Preservation and the cooperation of numerous individuals and local historical organizations.