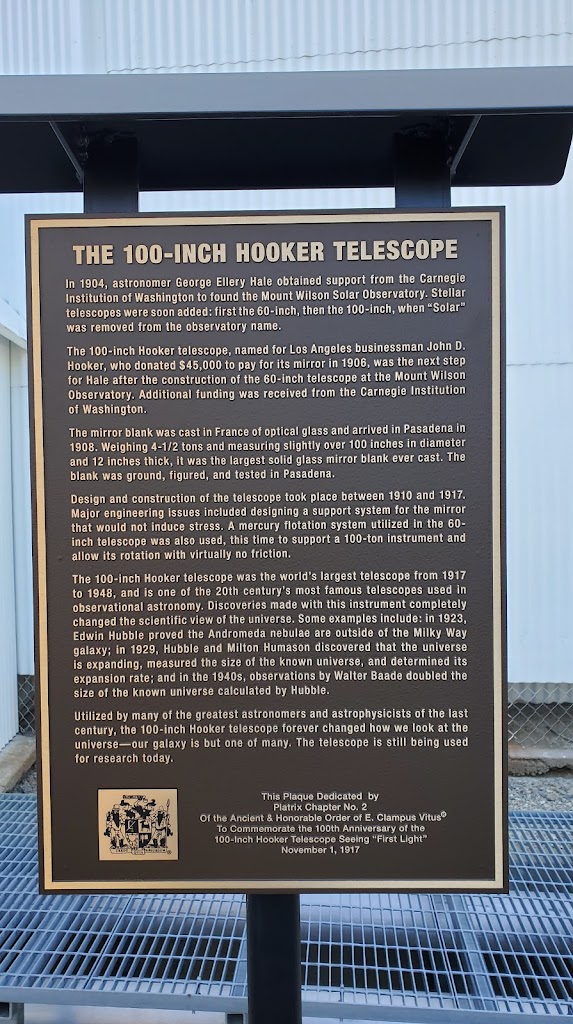 In 1904, astronomer George Ellery Hale obtained support from the Carnegie
Institution of Washington to found the Mount Wilson Solar Observatory. Stellar
telescopes were soon added: first the 60-inch, then the 100-inch, when “Solar”
was removed from the observatory name.
The 100-inch Hooker telescope, named for Los Angeles businessman John D.
Hooker, who donated $45,000 to pay for its mirror in 1906, was the next step
for Hale after the construction of the 60-inch telescope at the Mount Wilson
Observatory. Additional funding was received from the Carnegie Institution
of Washington.
The mirror blank was cast in France of optical glass and arrived in Pasadena in
1908. Weighing 4-1/2 tons and measuring slightly over 100 inches in diameter
and 12 inches thick, it was the largest solid glass mirror blank ever cast. The
blank was ground, figured, and tested in Pasadena.
Design and construction of the telescope took place between 1910 and 1917.
Major engineering issues included designing a support system for the mirror
that would not induce stress. A mercury flotation system utilized in the 60-
inch telescope was also used, this time to support a 100-ton instrument and
allow its rotation with virtually no friction.
The 100-inch Hooker telescope was the world’s largest telescope from 1917
to 1948, and is one of the 20th century’s most famous telescopes used in
observational astronomy. Discoveries made with this instrument completely
changed the scientific view of the universe. Some examples include: in 1923,
Edwin Hubble proved the Andromeda nebulae are outside of the Milky Way
galaxy; in 1929, Hubble and Milton Humason discovered that the universe
is expanding, measured the size of the known universe, and determined its
expansion rate; and in the 1940s, observations by Walter Baade doubled the
size of the known universe calculated by Hubble.
Utilized by many of the greatest astronomers and astrophysicists of the last
century, the 100-inch Hooker telescope forever changed how we look at the
universe—our galaxy is but one of many. The telescope is still being used
for research today.

This Plaque Dedicated by
Platrix Chapter No. 2
Of the Ancient and Honorable Order of E. Clampus Vitus®
To Commemorate the 100th Anniversary of the
100-Inch Hooker Telescope Seeing "First Light"
November 1, 1917