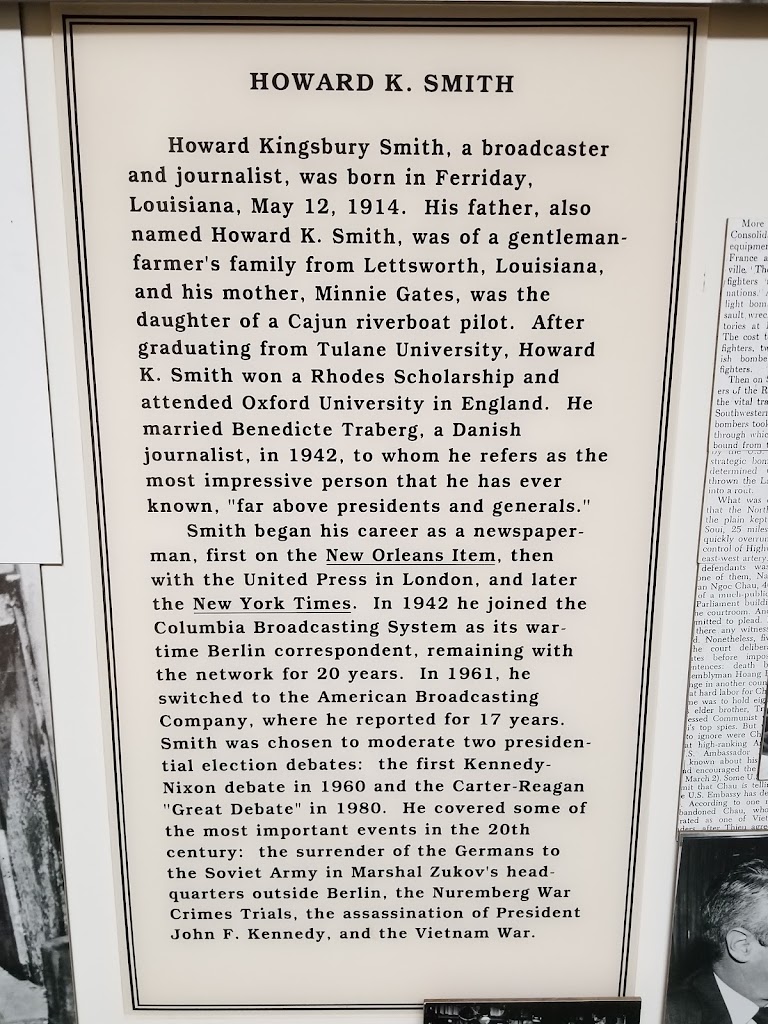 Howard Kingsbury Smith, a broadcasterand journalist, was born in Ferriday,Louisiana, May 12, 1914. His father, alsonamed Howard K. Smith, was of a gentleman-farmer's family from Lettsworth, Louisiana,and his mother, Minnie Gates, was thedaughter of a Cajun riverboat pilot. Aftergraduating from Tulane University, HowardK. Smith won a Rhodes Scholarship andattended Oxford University in England. Hemarried Benedicte Traberg, a Danishjournalist, in 1942, to whom he refers as themost impressive person that he has everknown, "far above presidents and generals."Smith began his career as a newspaper-man, first on the New Orleans Item, thenwith the United Press in London, and laterthe New York Times. In 1942 he joined theColumbia Broadcasting System as its war-time Berlin correspondent, remaining withthe network for 20 years. In 1961, heswitched to the American BroadcastingCompany, where he reported for 17 years.Smith was chosen to moderate two presidential election debates: the first Kennedy-Nixon debate in 1960 and the Carter-Reagan"Great Debate" in 1980. He covered some ofthe most important events in the 20thcentury: the surrender of the Germans tothe Soviet Army in Marshal Zukov's headquarters outside Berlin, the Nuremberg WarCrimes Trials, the assassination of PresidentJohn F. Kennedy, and the Vietnam War.