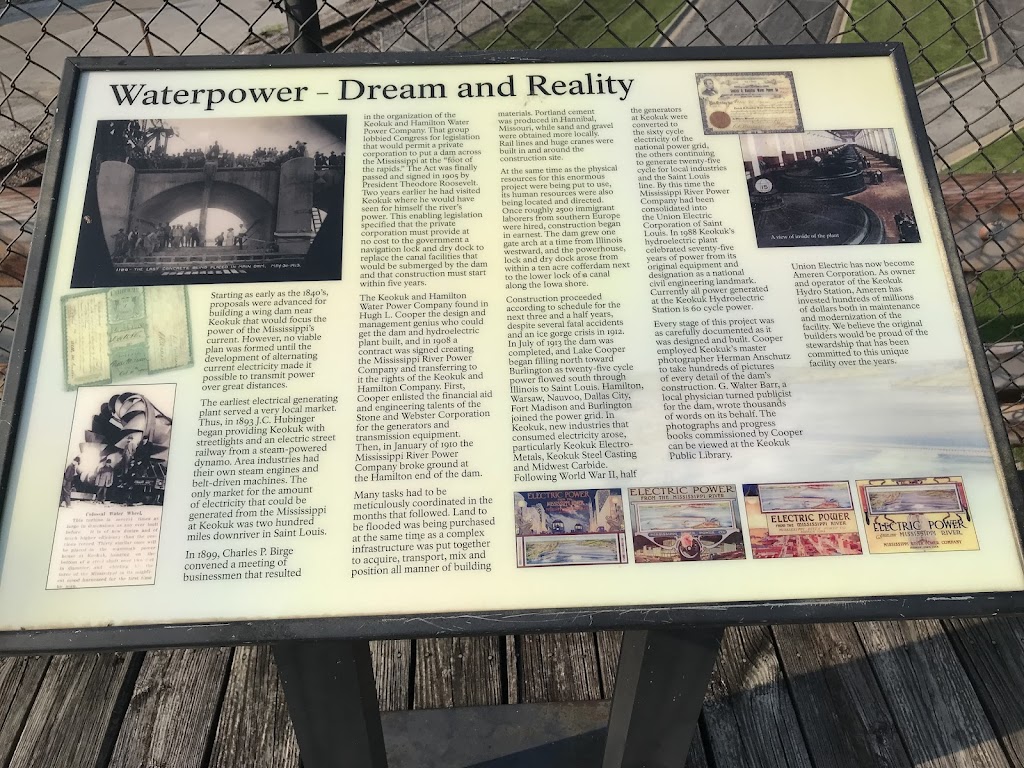 Starting as early as the 1840's, proposals were advanced for building a wing dam near Keokuk that would focus the power of the Mississippi's current. However, no viable plan was formed until the development of alternating current electricity made it possible to transmit power over great distances.The earliest electrical generating plant served a very local market. Thus, in 1893 J.C. Hubinger began providing Keokuk with streetlights and an electric street railway from a steam-powered dynamo. Area industries had their own steam engines and belt-driven machines. The only market for the amount of electricity that could be generated from the Mississippi at Keokuk was two hundred miles downriver in Saint Louis.In 1899, Charles P. Birge convened a meeting of businessmen that resulted in the organization of the Keokuk and Hamilton Water Power Company. That group lobbied Congress for legislation that would permit a private corporation to put a dam across the Mississippi at the "foot of the rapids." The Act was finally passed and signed in 1905 by President Theodore Roosevelt. Two years earlier he had visited Keokuk where he would have seen for himself the river's power. This enabling legislation specified that the private corporation must provide at no cost to the government a navigation lock and dry dock to replace the canal facilities that would be submerged by the darn and that construction must start within five years.The Keokuk and Hamilton Water Power Company found in Hugh L. Cooper the design and management genius who could get the dam and hydroelectric plant built, and in 1908 a contract was signed creating the Mississippi River Power Company and transferring to it the rights of the Keokuk and Hamilton Company. First, Cooper enlisted the financial aid and engineering talents of the Stone and Webster Corporation for the generators and transmission equipment. Then, in January of 1910 the Mississippi River Power Company broke ground at the Hamilton end of the dam.Many tasks had to be meticulously coordinated in the months that followed. Land to be flooded was being purchased at the same time as a complex infrastructure was put together to acquire, transport, mix and position all manner of building materials. Portland cement was produced in Hannibal, Missouri, while sand and gravel were obtained more locally. Rail lines and huge cranes were built in and around the construction site.At the same time as the physical resources for this enormous protect were being put to use, its human resources were also being located and directed. Once roughly 2500 immigrant laborers from southern Europe were hired, construction began in earnest. The dam grew one gate arch at a time from Illinois westward, and the powerhouse, lock and dry dock arose from within a ten acre cofferdam next to the lower lock of a canal along the Iowa shore.Construction proceeded according to schedule for the next three and a half years, despite several fatal accidents and an ice gorge crisis in 1912. In July of 1913 the dam was completed, and Lake Cooper began filling north toward Burlington as twenty-five cycle power flowed south through Illinois to Saint Louis. Hamilton, Warsaw, Nauvoo, Dallas City, Fort Madison and Burlington joined the power grid. In Keokuk, new industries that consumed electricity arose, particularly Keokuk Electro-Metals, Keokuk Steel Casting and Midwest Carbide. Following World War II, half the generators at Keokuk were converted to the sixty cycle electricity of the national power grid, the others continuing to generate twenty-five cycle for local industries and the Saint Louis line. By this time the Mississippi River Power Company had been consolidated into the Union Electric Corporation of Saint Louis. In i988 Keokuk's hydroelectric plant celebrated seventy-five years of power from its original equipment and designation as a national civil engineering landmark. Currently all power generated at the Keokuk Hydroelectric Station is 6o cycle power.Every stage of this project was as carefully documented as it was designed and built. Cooper employed Keokuk's master photographer Herman Anschutz to take hundreds of pictures of every detail of the dam's construction. G. Walter Ban, a local physician turned publicist for the dam, wrote thousands of words on its behalf. The photographs and progress books commissioned by Cooper can be viewed at the Keokuk Public Library.Union Electric has now become Ameren Corporation. As owner and operator of the Keokuk Hydro Station, Ameren has invested hundreds of millions of dollars both in maintenance and modernization of the facility. We believe the original builders would be proud of the stewardship that has been committed to this unique facility over the years.