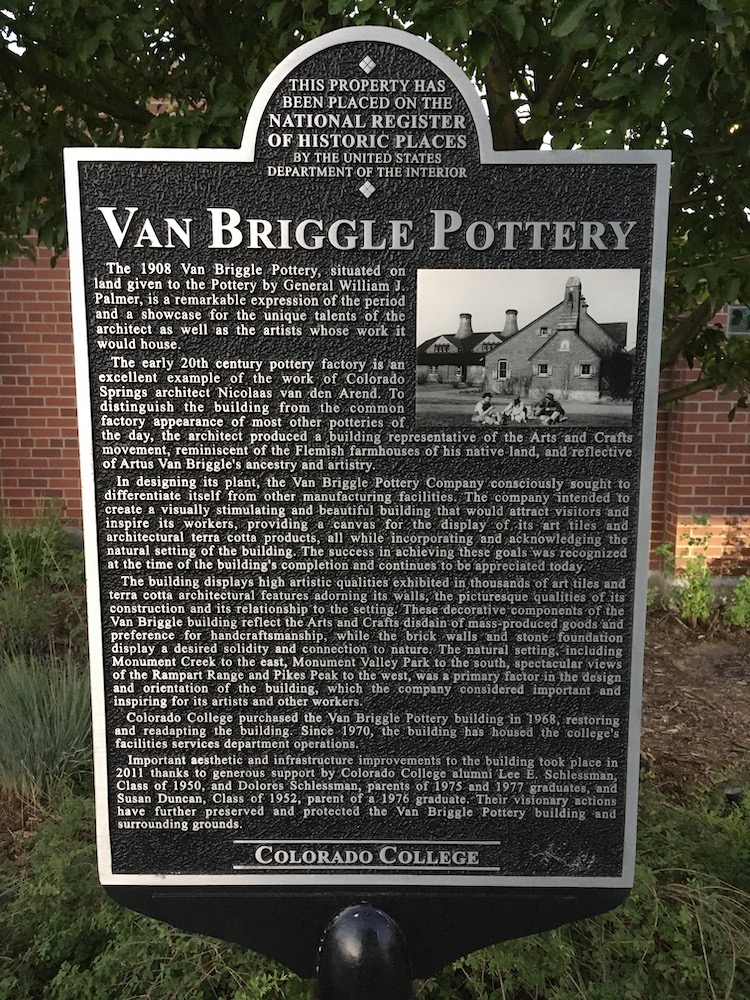 VAN BRIGGLE POTTERY
The 1908 Van Briggle Pottery, situated on land given to the Pottery by General William J. Palmer, is a remarkable expression of the period and a showcase for the unique talents of the architect as well as the artists whose work it would house.

The early 20th century pottery factory is an excellent example of the work of Colorado Springs architect Nicolaas van den Arend. To distinguish the building from the common factory apperance of most other potteries of the day, the architect produced a building representative of the Arts and Crafts movement, reminsicent of the Flemish farmhouse of his native land, and reflective of Artus Van Briggle's ancestry and artistry.

In designing its plant, Van Briggle Pottery Company consciously sought to differentiate itself from other manufacturing facilities. The company intended to create a visually stimulating and beautiful building that would attract visitors and inspire its workers, providing a canvas for the display of its art tiles and architectural terra cotta products, all while incorporating and acknowledging the natural setting of the building. The success in achieving these goals was recognized at the time of the building's completion and continues to be appreciated today.

The building displays high artistic qualities in thousands of art tiles and terra cotta architectural features adorning its walls, the picturesque qualities of its construction and its relationship to the setting. These decorative components of the Van Briggle building reflect the Arts and Crafts disdain of mass-produced goods and preference for handcraftsmanship, while the brick walls and stone foundation display a desired solidarity and connection to nature. The natural setting, including Monument Creek to the east, Monument Valley Park to the south, spectacular views of the Rampart Range and Pikes Peak to the west, was a primary factor in the design and orientation of the building, which the company considered important and inspiring for its artists and other workers.

Colorado College purchased the Van Briggle Pottery building in 1968, restoring and readapting the building. Since 1970, the building has housed the college's facilities services department operations.