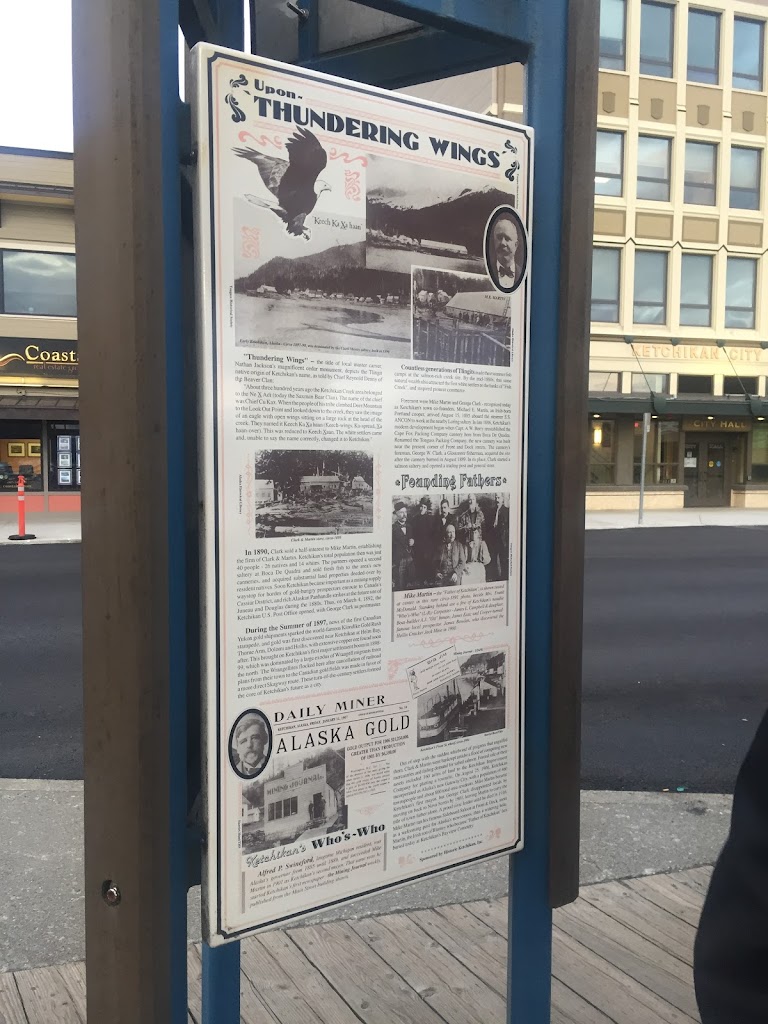 "Thundering Wings" - the title of local master carver, Nathan Jackson's magnificent cedar monument, depicts the Tlingit native origin of Ketchikan's name, as told by Chief Reynold Denny of the Beaver Clan:
"About three hundred years ago the Ketchikan Creek area belonged to the Ne X Adi (today the Saxman Bear Clan). The name of the chief was Chief Cu Kax. When the people of his tribe climbed Deer Mountain to the Look Out Point and looked down to the creek, they saw the image of an eagle with open sings sitting on a large rock at the head of the creek .They named it Keech Ka Xa haan (Keech-wings, Ka-spread, Xa haan-over). This was reduced to Keech Xaan. The white settlers came and, unable to say the name correctly, changed it to Ketchikan."

In 1890, Clark sold a half-interest to Mike Martin, establishing the firm of Clark & Martin. Ketchikan's total population then was just 40 people - 26 natives and 14 whites. The partners opened a second saltery at Boca De Quadra and sold fresh fish to the area's new canneries, and acquired substantial land properties deeded-over by resident natives. Soon Ketchikan became important as a mining supply waystop for hordes of gold-hungry prospectors enroute to Canada's Cassiar District, and rich Alaskan Panhandle strikes at the future site of Juneau and Douglas during the 1880s. Thus, on March 4, 1892, the Ketchikan U.S. Post Office opened, with George Clark as postmaster.

During the Summer of 1897, news of the first Canadian Yukon gold shipments sparked the world-famous Klondike Gold Rush stampede, and gold was first discovered near Ketchikan at Helm Bay, Thorne Arm, Dolomi and Hollis, with extensive copper ore found soon after. This brought on Ketchikan's first major settlement boom in 1898-99, which was dominated by a large exodus of Wrangell migrants from the north. The Wrangellites flocked here after cancellation of railroad plans from their town to the Canadian gold fields was made in favor of a more direct Skagway route. These turn-of-the-century settlers formed the core of Ketchikan's future as a city.
Countless generations of Tlingits made their summer fish camps at the salmon-rich creek site. By the mid-1880s, this same natural wealth also attracted the first white settlers to the banks of "Fish Creek", and inspired pioneer commerce.
Foremost were Mike Martin and George Clark - recognized today as Ketchikan's town co-founders, Michael E. Martin, an Irish-born Portland cooper, arrived August 15, 1885 aboard the steamer S.S. ANCON to work at the nearby Loring saltery. In late 1886, Ketchikan's modern development began when Capt. A. W. Berry reestablished the Cape Fox Packing Company cannery here from Boca De Quadra. renamed the Tongass Packing Company, the new cannery was built near the present corner of Front and Dock streets. The cannery's foreman, George W. Clark, a Gloucester fisherman, acquired the site after the cannery burned in 1889. In its place, Clark started a salmon saltery and opened a trading post and general store.

Out of step with the sudden whirlwind of progress that engulfed them, Calrk & Martin went bankrupt amidst a flood of competing new mercantiles and failing demand for salted salmon. Forced sale of their assets included 160 acres of land to the Ketchikan Improvement Company for platting a townsite. On August 25, 1900, Ketchikan incorportated as Alaska's new Gateway City, with a population of 460 townspeople and about 800 total area residents. Mike Martin became Ketchikan's first mayor, but George Clark disappointed locals by moving on back to Nova Scotia by 1901, leaving Martin to carry the title of town father alone. A proud civic leader until he died in 1916. Mike Martin ran his famour Sideboard Saloon at Front & Dock, more as a welcoming post for Alaska's newcomers, than a watering hole. Martin, the Irish son of Blamey who became "Father of Ketchikan" lies buried today at Ketchikan's Bayview Cemetary.