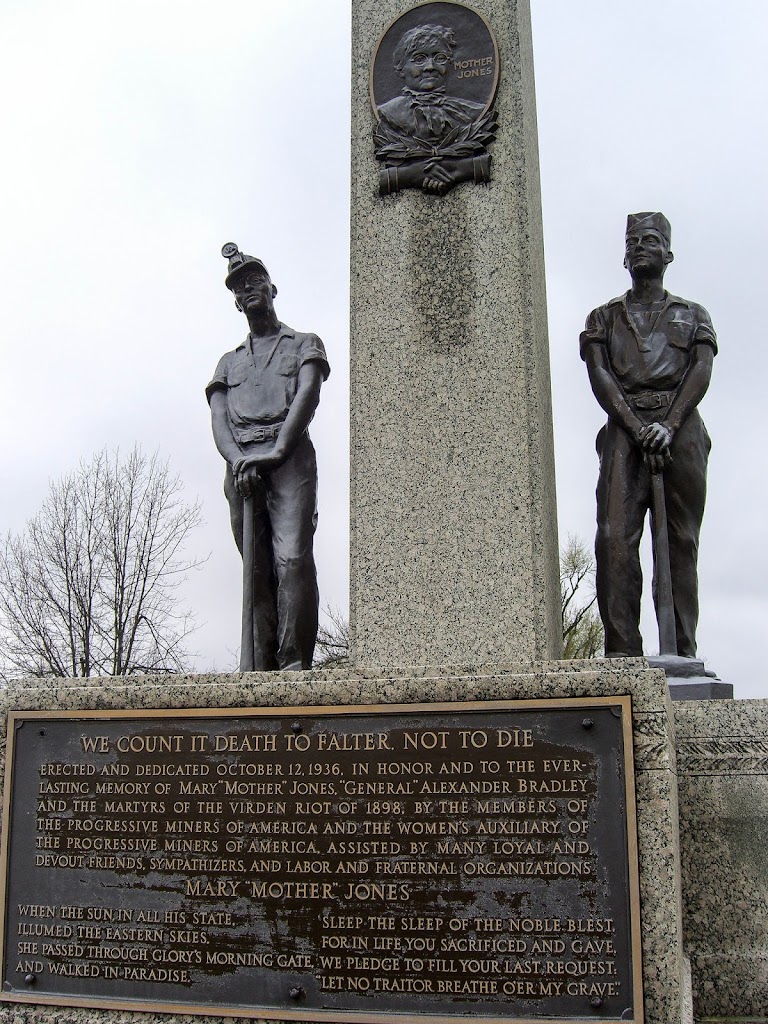 We happened across this piece of U.S. labor history along Interstate 55, about 50 miles northeast of St. Louis. That doesn't compute, until you remember that much of Illinois was (and some still is) coal country and was the scene of fierce union battles for decades in the late 19th and 20th century.

The monument has large plaques on three sides. Besides the main on the front of the memorial, there are two plaques on the sides with the names of 20 miners who "have given their lives to the cause of clean unionism in America." All died in the early and mid-1930s during unrest that grew out of Illinois miners' discontent with a wage cut -- from $6.10 to $5 a day -- negotiated by the national leadership of the United Mine Workers of America.

Their response was to form their own organization, the Progressive Miners of America, and to build and dedicate this installation. It's as much a monument to their movement as it is to Mother Jones, who died in 1930.

Why was she buried here? Union miners killed during an 1897 strike at Virden, Illinois, were buried in Mount Olive -- there's a good take on the incident here -- and Mary "Mother" Jones wanted to be buried with them:


"When the last call comes for me to take my ﬁnal rest,” Mother Jones had written, “will the miners see that I get a resting place in the same clay that shelters the miners who gave up their lives on the hills of Virden, Illinois. . . They are responsible for Illinois being the best organized labor state in America. I hope it will be my consolation when I pass away to feel I sleep under the clay with those brave boys.”


We Count It Death to Falter, Not to Die

Erected and dedicated October 12, 1936, in honor and to the everlasting memory of Mary “Mother” Jones, “General” Alexander Bradly and the martyrs of the Virden Riot of 1898, by the members of the Progressive Miners of America and the Women’s Auxiliary of the Progressive Miners of America, assisted by many loyal and devout friends, sympathizers, and labor and fraternal organizations.

When the sun in all his state

She passed through Glory’s morning gate,

And walked in Paradise.

Sleep the sleep of the noble blest,

For in life you sacrificed and gave.

We pledge to fill your last request,