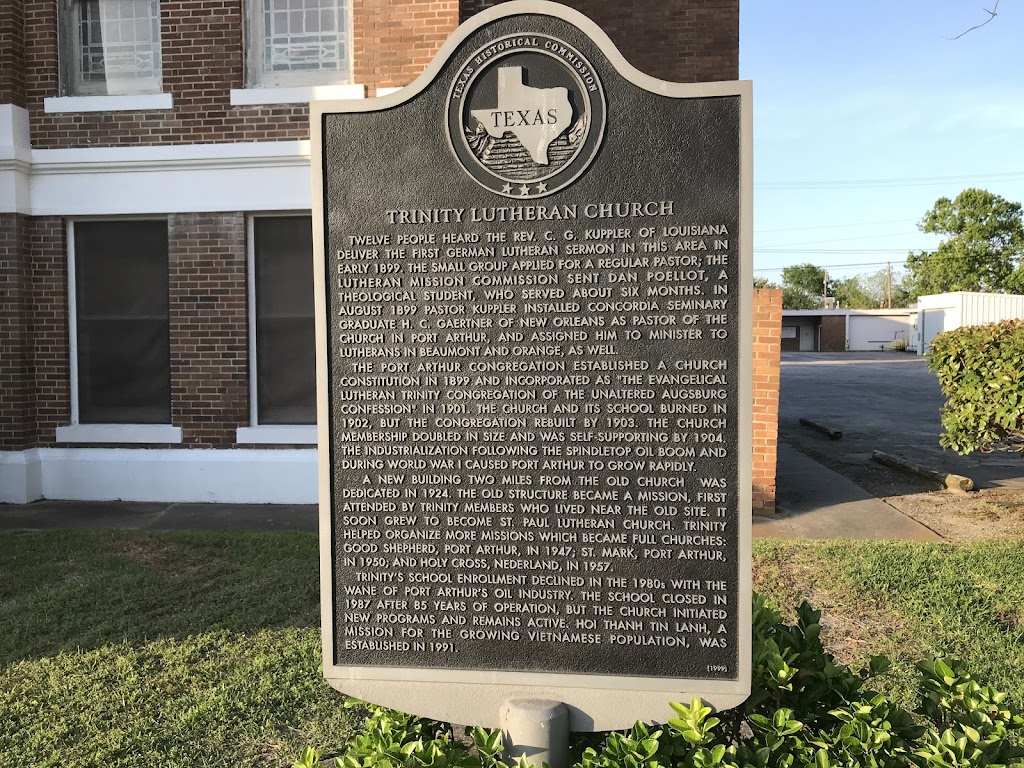 Twelve people heard the Rev. C. G. Kuppler of Louisiana deliver the last German Lutheran sermon in this area in early 1899. The small group applied for a regular pastor;  the Lutheran Mission Commission sent Dan Poelott, a theological student, who served about 6 months. In August 1899 Pastor Kuppler installed Concordia Seminary graduate H.C. Gaertner of New Orleans as pastor of the church in Port Arthur, and assigned him to minister to Lutherans in Beaumont and Orange as well. <p> The Port Arthur congregation established a church constitution in 1899 and incorporated as "The Evangelical Lutheran Trinity Congregation of the Unaltered Augsburg Confession" in 1901. The church and its school burned in 1902, but the congregation rebuilt by 1903. The church membership doubled in size and was self-supporting by 1904. The industrialization following the Spindletop oil boom and during World War I caused Port Arthur to grow rapidly. <p>A new building two miles from the old church was dedicated in 1924. The old structure became a mission, first attended by Trinity members who lived near the old site. It soon grew to become St. Paul Lutheran Church. Trinity helped organize more missions which became full churches: Good Shepard, Port Arthur, in 1947; St. Mark, Port Arthur, in 1950; and Holy Cross, Nederland, in 1957.<p>Trinity's school enrollment declined in the 1980s with the wane of Port Arthur's oil industry. The school closed in 1987, after 85 years of operation, but the church initiated new programs and remains active. Hoi ThanhTin Lanh, a mission for the growing Vietnamese population, was established in 1991.