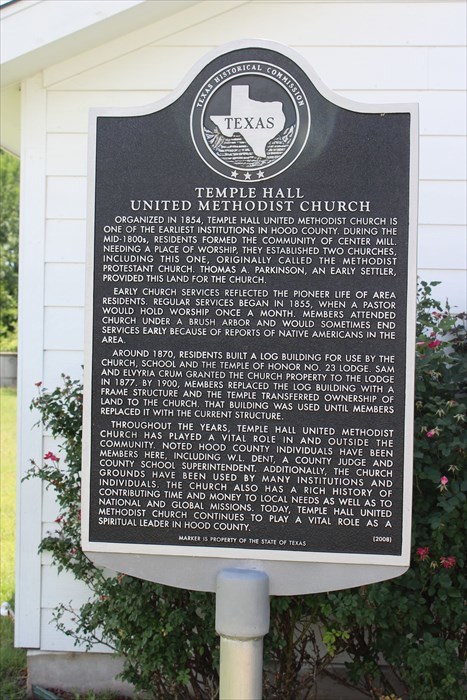 Organized in 1854, Temple Hall United Methodist Church is one of the earliest institutions in Hood County. During the mid-1800s, residents formed the community of Center Mill. Needing a place of worship, they established two churches, including this one, originally called the Methodist Protestant Church. Thomas A. Parkinson, an early settler, provided this land for the church.Early church services reflected the pioneer life of area residents. Regular services began in 1855, when a pastor would hold worship once a month. Members attended church under a brush arbor and would sometimes end services early because of reports of Native Americans in the area.Around 1870, residents built a log building for use by the church, school and the Temple of Honor No. 23 Lodge. Sam and Elvyria Crum granted the church property to the lodge in 1877. By 1900, members replaced the log building with a frame structure and the Temple transferred ownership of land to the church. That building was used until members replaced it with the current structure.Throughout the years, Temple Hall United Methodist Church has played a vital role in and outside the community. Noted Hood County individuals have been members here, including W.L. Dent, a county judge and county school superintendent. Additionally, the church grounds have been used by many institutions and individuals. The church also has a rich history of contributing time and money to local needs as well as to national and global missions. Today, Temple Hall United Methodist Church continues to play a vital role as a spiritual leader in Hood County.