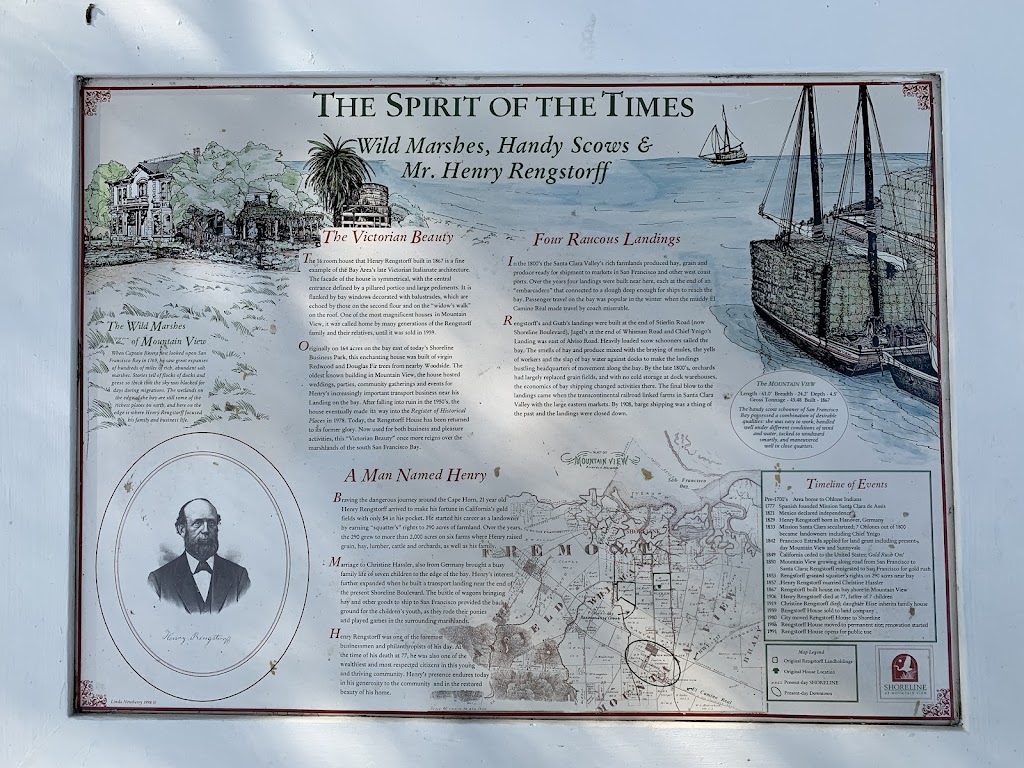 The Spirit of the Times

Wild Marshes, Handy Scows & Mr. Henry Rengstorff
The Wild Marshes of Mountain View
When Captain Rivera first looked upon San Francisco Bay in 1769, he saw great expanses of hundreds of miles of rich, abundant salt marshes. Stories tell of flocks of ducks and geese so thick that the sky was blacked for days during migrations. The wetlands on the edge of the bay are still some of the richest places on earth, and here on the edge is where Henry Rengstorff focused his family and business life.
The Victorian Beauty
The 16 room house that Henry Rengstorff built in 1867 is a fine example of the Bay Area’s late Victorian Italianate architecture. The facade of the house is symmetrical, with the central entrance defined by a pillared portico and large pediments. It is flanked by bay windows decorated with balustrades, which are echoed by those on the second flour [sic] and on the “widows walk” on the roof. One of the most magnificent houses in Mountain View, it was called home by many generations of the Rengstorff family and their relatives, until it was sold in 1959.
Originally on 164 acres on the bay east of today’s Shorline Business Park, this enchanting house was built of virgin Redwood and Douglas Fir trees from nearby Woodside. The oldest known building in Mountain View, the house hosted weddings, parties, community gatherings and events for Henry’s increasingly important transport business near his Landing on the bay. After falling into ruin in the 1950’s, the house eventually made its way into the Register of Historical Places in 1978. Today, the Rengstorff House has been returned to its former glory. Now used for both business and pleasure activities, this “Victorian Beauty” once more reigns over the marshlands of the south San Francisco Bay.
A Man Named Henry
Braving the dangerous journey around the Cape Horn, 21 year old Henry Rengstorff arrived to make his fortune in California’s gold field with only $4 in his pocket. He started his career as a landowner by earning “squatter’s” rights on 290 acres of farmland. Over the years, the 290 grew to more than 2,000 acres on six farms where Henry raised grain, hay, lumber, cattle and orchards, as well as his family.
Marriage to Christine Hassler, also from Germany brought a busy family life of seven children to the edge of the bay. Henry’s interest further expanded when he built a transport landing near the end of the present Shoreline Boulevard. The bustle of wagons bringing hay and other goods to ship to San Francisco provided the back ground for the children’s youth, as they rode their ponies and played games in the surrounding marshlands.
Henry Rengstorff was one of the foremost businessmen and philanthropists of his day. At the time of his death at 77, he was also one of the wealthiest and most respected citizens in this young and thriving community. Henry’s presence endures today in his generosity to the community and in the restored beauty of his home.
Four Raucous Landings
In the 1800’s the Santa Clara Valley’s rich farmlands produced hay, grain and produce ready for shipment to markets in San Francisco and other west coast ports. Over the years four landings were built near here, each at the end of an “embarcadero” that connected to a slough deep enough for ships to reach the bay. Passenger travel on the bay was popular in the winter when the muddy El Camino Real made travel by coach miserable.
Renstorff’s and Guth’s landings were built at the end of Stierlin Road (now Shoreline Boulevard), Jagel’s at the end of Whisman Road and Chief Ynigo’s Landing was east of Alviso Road. Heavily loaded scow schooners sailed the bay. The smells of hay and produce mixed with the braying of mules, the yells of workers and the slap of bay water against docks to make the landings bustling headquarters on movement along the bay. By the last 1800’s, orchards had largely replace grain fields, and with no cold storage at dock warehouses, the economics of bay shipping changed activities there. The final blow to the landings came when the transcontinental railroad linked farms in Santa Clara Valley with the large eastern markets. By 1908, barge shipping was a thing of the past and the landings were closed down.
The Mountain View [a ship illustrated on the plaque]
Length - 61.0’ Breadth - 24.2’ Depth - 4.5’
Gross Tonnage - 43.48 Built - 1867
The handy scow schooner of San Francisco Bay possessed a combination of desireable qualities: she was easy to work, handled well under different conditions of wind and water, tacked to windward smartly, and maneuvered well in close quarters.
Timeline of Events
Pre-1700’s Area home to Ohlone Indians
1777 Spanish founded Mission Santa Clara de Assis
1821 Mexico declared independence
1829 Henry Rengstorff born in Hanover, Germany
1833 Mission Santa Clara secularized; 7 Ohlones out of 1800 became landowners including Chief Ynigo
1842 Francisco Estrada applied for land grant including present-day Mountain View and Sunnyvale
1849 California ceded to the United States; Gold Rush On!
1850 Mountain View growing along road from San Francisco to Santa Clara; Rengstorff emigrated to San Francisco for gold rush
1853 Rengstorff granted squatter’s rights on 290 acres near bay
1857 Henry Rengstorff married Christine Hassler
1867 Rengstorff built house on the bay shore in Mountain View
1906 Henry Rengstorff died at 77, father of 7 children
1919 Christine Rengstorff died; daughter Elise inherits family house
1959 Rengstorff House sold to land company
1980 City moved Rengstorff House to Shoreline
1986 Rengstorff House moved to permanent site; renovation started
1991 Rengstorff House open for public use