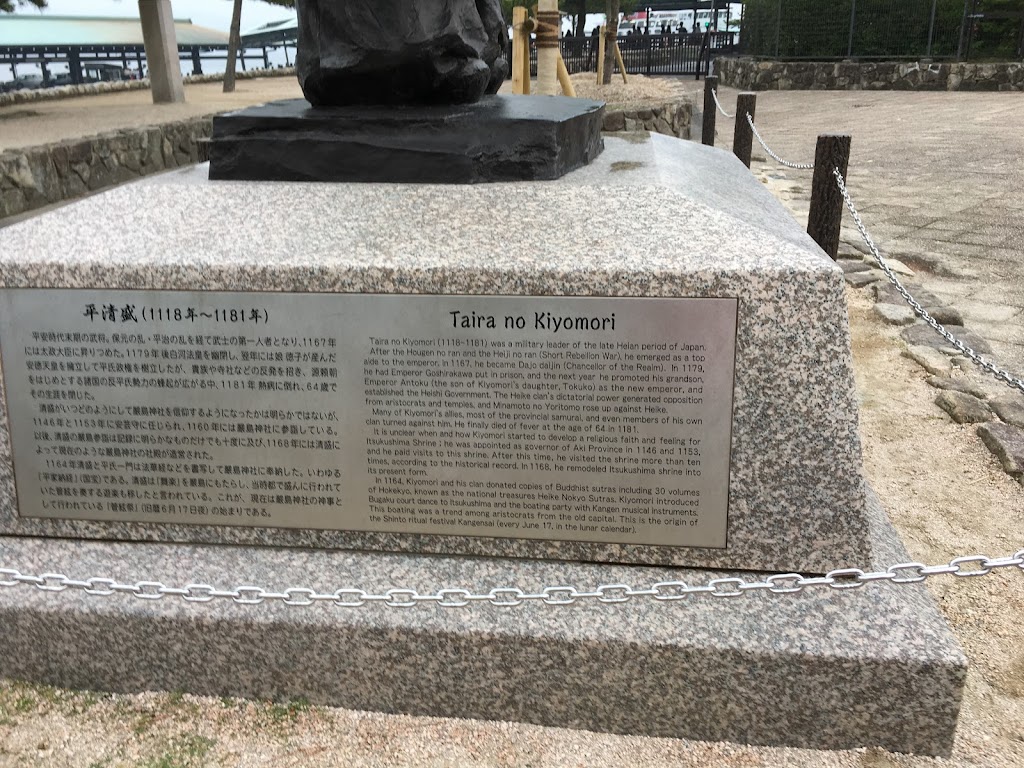 Taira no Kiyomori (1118 – 1181) was a military leader of the late Heian period of Japan. After the Hougen no ran and the Heiji no ran (Short Rebellion War), he emerged as a top aide to the emperor.  In 1167, he became Dajo daijin (Chancellor of the Realm).  In 1179, he had Emperor Goshirakawa put in prison, and the next year he promoted his grandson, Emperor Antoku (the son of Kiyomori’s daughter, Tokuko) as the new emperor, and established the Heishi Government.  The Heike clan’s dictatorial power generated opposition from aristocrats and temples, and Minamoto no Yoritomo rose up against Heike.

Many of Kiyomori’s allies, most of the provincial samurai, and even members of his own clan turned against him.  He finally died of fever at the age of 64 in 1181.

It is unclear when and how Kiyomori started to develop a religious faith and feeling for Itsukushima Shrine; he was appointed as governor of Aki Province in 1146 and 1153, and he paid visits to this shrine.  After this time, he visited the shrine more than ten times, according to the historical record. In 1168, he remodeled Itsukushima shrine into its present form.

In 1164, Kiyomori and his clan donated copies of Buddhist sutras include 30 volumes of Hokekyo, known as the national treasures Heike Nokyo Sutras.  Kiyomori introduced Bugaku court dance to Itsukushima and the boating party with Kangen musical instruments.  This boating was a trend among aristocrats from the old capital.  This is the origin of the Shinto ritual festival Kangensai (every June 17, in the lunar calendar).