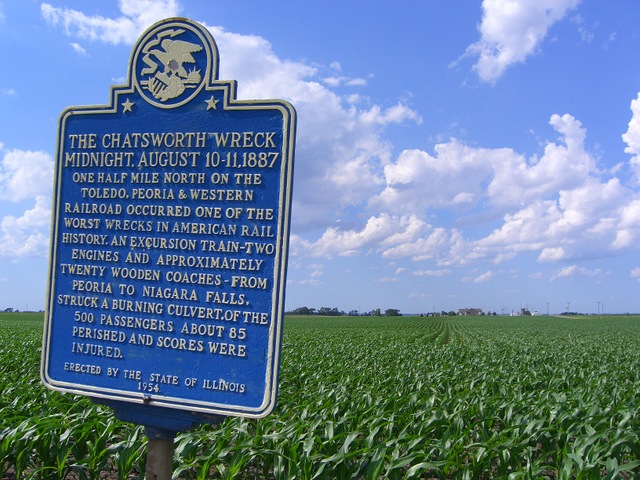 I first encountered this plaque more than 40 years ago, during one of my drives to and from college in Central Illinois. Here's something I wrote about it in 2006 after a sort of daylong local history field trip with my dad and brother:

We fueled up at the Freedom gas station in Lexington -- just $2.899 a gallon -- then headed north on old U.S. 66 to Chenoa. I wanted to take U.S. 24 east to Interstate 57 both because I knew there was a Dairy Queen along the way (in Fairbury) -- my dad's favorite road-trip stop -- and because I remembered a little piece of local history along the way: the Chatsworth Wreck.

Back in the mid-'70s, I stopped to read a historical marker just outside Chatsworth, one of the series of farm towns strung along U.S. 24. It reads:

One-half mile north on the Toledo, Peoria & Western Railroad occurred one of the worst wrecks in American rail history. An excursion train - two engines and approximately twenty wooden coaches - from Peoria to Niagara Falls, struck a burning culvert . Of the 500 passengers about 85 perished and scores were injured.

Erected by the State of Illinois, 1954

We stopped at the DQ in Fairbury, then continued on through Chatsworth to the wreck marker, which is about two and a half miles east of town, nearly on the Livingston-Ford county line. One thing that's a little unclear when you're at the roadside, though, is exactly where the disaster occurred. The TP&W tracks -- the railroad still goes by that name -- are a half mile north of the highway. I wanted to see if we could find the site of the notorious "burning culvert" -- actually, a small wooden trestle. I imagined there could be a memorial or marker at the spot where the train left the tracks.

We parked at an electrical substation near the railroad's marked but unguarded level crossing. My sense, based on the marker's placement west of the section road that runs up the county line was that the wreck site was west of the road, too. Chris and I walked along the single track until we got to a culvert maybe a quarter-mile west of the road. It's not deep -- in fact, it's a narrow ditch that crosses under the track through an 8- or 10-foot-diameter steel pipe. The site is unprepossessing, just like every foot of track east or west of it to the horizon, and there was nothing to suggest we were at the scene of a sensational event.

After we walked back to the car and started east again on 24, Chris and I spotted another culvert -- this one an actual trestle -- just east of the county line. We turned around and hiked out to it, too. It's a much more satisfying place for a calamity: The tracks cross a bridge that's about 75 feet long and a good 20 feet above a sluggish little creek. We agreed that between the two possible sites, this seemed the more likely.

Back at home, I poked around online to see if I could find some account that sheds light on the wreck's precise location. Chatsworth had a newspaper, the Plaindealer, in 1887, and much more recently, a retired teacher and local historian there, Helen Louise Plaster Stoutemyer, published a book on the disaster, "The Train that Never Arrived." Eventually, I came across a Chatsworth native's website that includes the Plaindealer's first account of the tragedy. The story says the train left the tracks at "the first bridge west of the county line" -- the first place Chris and I looked, not the second. In addition to offering the salient facts, the writer has a lot to say about the impression the wreck left:

"The sight was most terrible. ... It was too horrible to admit of description.  The screams and moans of the wounded were heartrending, and the terror of the sight can not be imagined. ... To add to the terror of the scene a heavy thunder and lightening storm came up, and , with heavy rain made such a scene as would appall the bravest hearts. ... Even the strongest men were forced to tears as they heard and saw the anguish of the unhappy excursionists.  While many displayed strong courage, grit, and heroism, others were almost frantic, and those in attendance upon them were forced to hold them to prevent acts of insanity and self-destruction."