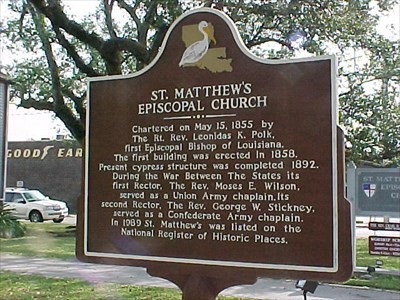 Chartered on May 15, 1855 by The Rt. Rev. Leonidas K. Polk, the first Episcopal Bishop of Louisiana. The first building was erected in 1858. Present cypress structure was completed 1892. During the War Between The States its first Rector, The Rev. Moses E. Wilson, served as a Union Army chaplain. Its second Rector, The Rev. George W. Stickney, served as a Confederate Army chaplain. In 1989, St. Matthew's was listed on the National Register of Historic Places.