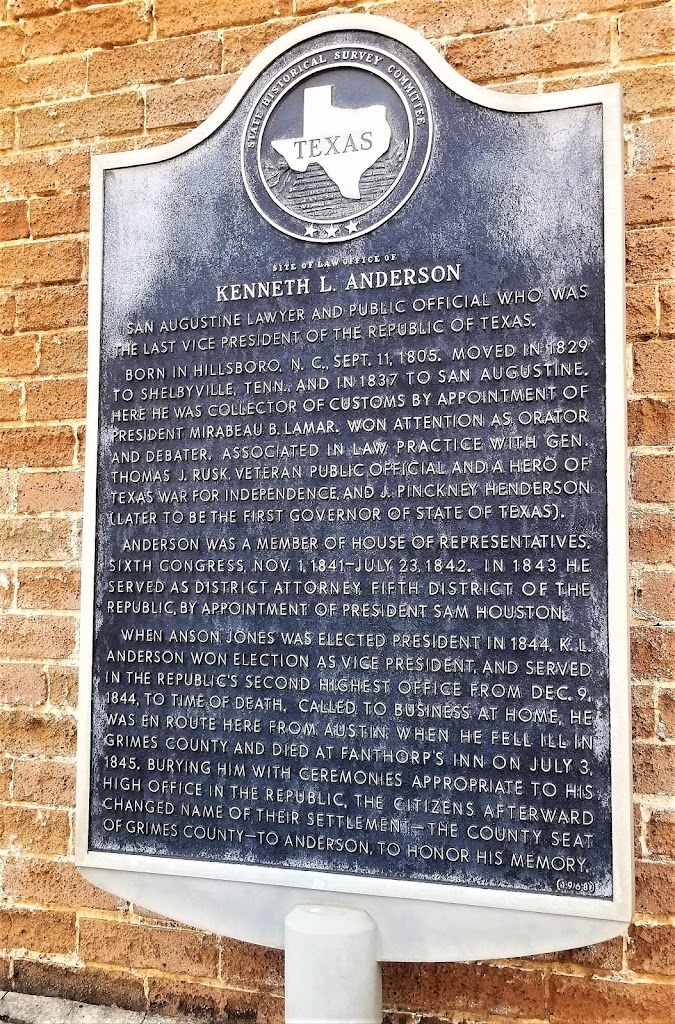 San Augustine lawyer and public official who was the last Vice President of the Republic of Texas.

Born in Hillsboro, N. C., Sept. 11, 1805. Moved in 1829 to Shelbyville, Tenn., and in 1837 to San Augustine. Here he was collector of customs by appointment of President Mirabeau B. Lamar. Won attention as orator and debater. Associated in law practice with Gen. Thomas J. Rusk, veteran public official and a hero of Texas War for Independence, and J. Pinckney Henderson (later to be the first Governor of State of Texas).

Anderson was a member of House of Representatives, Sixth Congress, Nov. 1, 1841-July 23, 1842. In 1843 he served as District Attorney, Fifth District of the Republic, by appointment of President Sam Houston.

When Anson Jones was elected President in 1844, K. L. Anderson won election as Vice President, and served in the Republic's second highest office from Dec. 9, 1844, to time of death. Called to business at home, he was en route here from Austin when he fell ill in Grimes County and died at Fanthorp's Inn on July 3, 1845. Burying him with ceremonies appropriate to his high office in the republic, the citizens afterward changed name of their settlement - the county seat of Grimes County - to Anderson to honor his memory.