Settlement of the German Coast 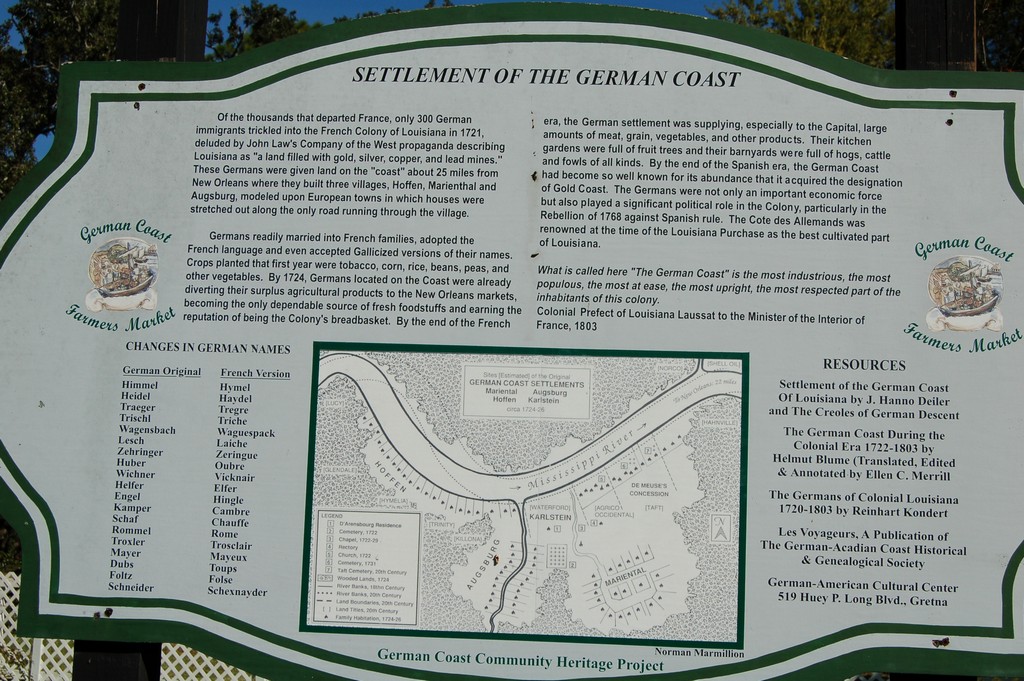 Of the thousands that departed France, only 300 German immigrants trickled in to the French Colony of Louisiana in 1721, deluded by John Law's Company of the West propaganda describing Louisiana as "a land filled with gold, silver, copper and lead mines." These Germans were given land on the "coast" about 25 miles from New Orleans where they built three villages, Hoffen, Marienthal and Augsburg, modeled upon European towns in which houses were stretched out along the only road running through the village.Germans readily married into French families, adopted the French language and even accepted Gallicized versions of their names. Crops planted that first year were tobacco, corn, rice, beans, peas and other vegetables. By 1724 Germans located on the Coast were already diverting their surplus agricultural products to the New Orleans markets, becoming the only dependable source of fresh foodstuffs and earning the reputation of being the Colony's breadbasket. By the end of the French era, the German settlement was supplying, especially to the Capital, large amounts of meat, grain, vegetables and other products. Their kitchen gardens were full of fruit trees and their barnyards were full of hogs, cattle and fowls of all kinds. By the end of the Spanish era, the German Coast had become so well known for its abundance that it acquired the designation of Gold Coast. The Germans were not only an important economic force but also played a significant political role in the Colony, particularly in the Rebellion of 1768 against the Spanish rule. The Cotes des Allemands was renowned at the time of the Louisiana Purchase as the best cultivated part of Louisiana.What is called here "The German Coast" is the most industrious, the most populous, the most at ease, the most upright, the most respected part of the inhabitants of this colony.Colonial Prefect of Louisiana Laussat to the Minister of the Interior of France, 1803