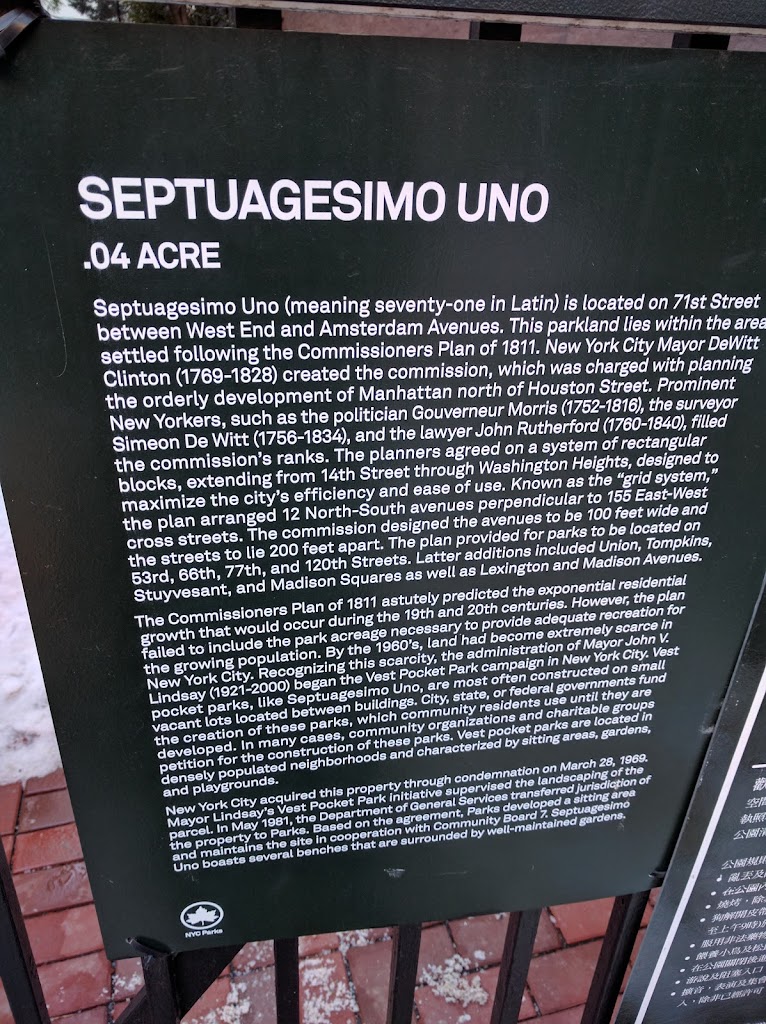 Septuagesimo Uno (meaning seventy-one in Latin) is located on 71st Street between West End and Amsterdam Avenues. This parkland lies within the area settled following the Commissioners Plan of 1811. New York City Mayor DeWitt Clinton (1769-1828) created the commission, which was charged with planning the orderly development of Manhattan north of Houston Street. Prominent New Yorkers, such as the politician Gouverneur Morris (1752-1816), the surveyor Simeon De Witt (1756-1834), and the lawyer John Rutherford (1760-1840), filled the commission's ranks. The planners agreed on a system of rectangular blocks, extending from 14th Street through Washington Heights, designed to maximize the city's efficiency and ease of use. Known as the "grid system," the plan arranged 12 North-South avenues perpendicular to 155 East-West cross streets. The commission designed the avenues to be 100 feet wide and the streets to lie 200 feet apart. The plan provided for parks to be located on 53rd, 66th, 77th, and 120th Streets. Latter additions included Union, Tompkins, Stuyvesant, and Madison Squares as well as Lexington and Madison Avenues.

The Commissioners Plan of 1811 astutely predicted the exponential residential growth that would occur during the 19th and 20th centuries. However, the plan failed to include the park acreage necessary to provide adequate recreation for the growing population. By the 1960's, land had become extremely scarce in New York City. Recognizing this scarcity, the administration of Mayor John V. Lindsay (1921-2000) began the Vest Pocket Park campaign in New York City. Vest pocket parks, like Septuagesimo Uno, are most often constructed on small vacant lots located between buildings. City, state, or federal governments fund the creation of these parks, which community residents use until they are developed. In many cases, community organizations and charitable groups petition for the construction of these parks. Vest pocket parks are located in densely populated neighborhoods and characterized by sitting areas, gardens, and playgrounds.

New York City acquired this property through condemnation on March 28, 1969. Mayor Lindsay's Vest Pocket Park initiative supervised the landscaping of the parcel. In May 1981, the Department of General Services transferred jurisdiction of the property to Parks. Based on the agreement, Parks developed a sitting area and maintains the site in cooperation with Community Board 7. Septuagesimo Uno boasts several benches that are surrounded by well-maintained gardens.