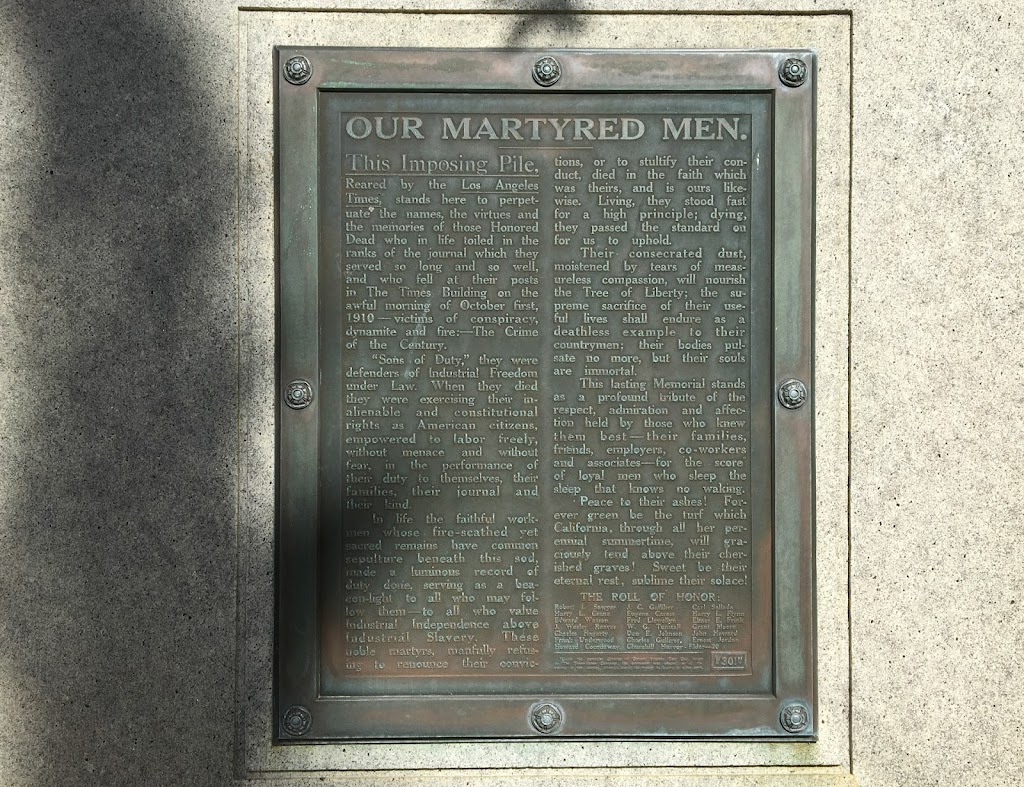 The plaque and monument, in Hollywood Forever cemetery, commemorate the October 1, 1910, bombing of the Los Angeles Times building by militant unionists who targeted the paper and its owner because of their uncompromising stance against organized labor. Indeed, the plaque uses the coded language of the era to refer to non-union shops as "Industrial Independence" and union workers as subject to "Industrial Slavery."

According to https://www.latimes.com/entertainment/arts/miranda/la-et-cam-esotouric-los-angeles-times-bombing-20170922-story.html a recent L.A. Times account, 21 people died in the bombing, including some newsroom staff (the plaque lists the names of 20 dead, four of whom -- including 29-year-old assistant city editor https://www.findagrave.com/memorial/100935607/arlie-churchill-harvey_elder Arlie Churchill Harvey-Elder -- are buried elsewhere).

Note the "30" at the end of the plaque text -- newspaper and wire service code for "end" or "end of dispatch."

This Imposing Pile, Reared by the Los Angeles Times, stands here to perpetuate the names, the virtues and the memories of those Honored Dead who in life toiled in the ranks of the journal which they served so long and so well, and who fell at their posts in The Times Building on the awful morning of October First, 1910 -- victims of conspiracy, dynamite and fire: — The Crime of the Century.

"Sons of Duty," they were defenders of Industrial Freedom under Law. When they died they were exercising their inalienable and constitutional rights as American citizens, empowered to labor freely, without menace and without fear, in the performance of their duty to themselves, their families, their journal and their kind.

In life the faithful workmen whose fire-scathed yet sacred remains have common sepulture beneath this sod, made a luminous record of duty done, serving as a beacon-light to all who may follow them -- to all who value Industrial Independence above Industrial Slavery these noble martyrs, manfully refusing to renounce their convictions, or to stultify their conduct, died in the faith which was theirs, and is ours likewise. Living, they stood fast for a high principle; dying, they passed the standard on for us to uphold.

Their consecrated dust, moistened by tears of measureless compassion, will nourish the Tree of Liberty; the supreme sacrifice of their useful lives shall endure as a deathless example to their countrymen; their bodies pulsate no more, but their souls are immortal.

This lasting Memorial stands as a profound tribute of the respect, admiration and affection held by those who knew them best -- their families, friends, employers, co-workers and associates -- for the score* of loyal men who sleep the sleep that knows no waking.

Peace to their ashes! Forever green be the turf which California, through all her perennial summertime, will graciously tend above their cherished graves! Sweet be their eternal rest, sublime their solace!

The Roll of Honor

*Under the particular direction of General Harrison Gray Otis, acting for the Times Mirror Corporation, this monument was erected to all the victims of the disaster, although four of the twenty lie buried in other spots. 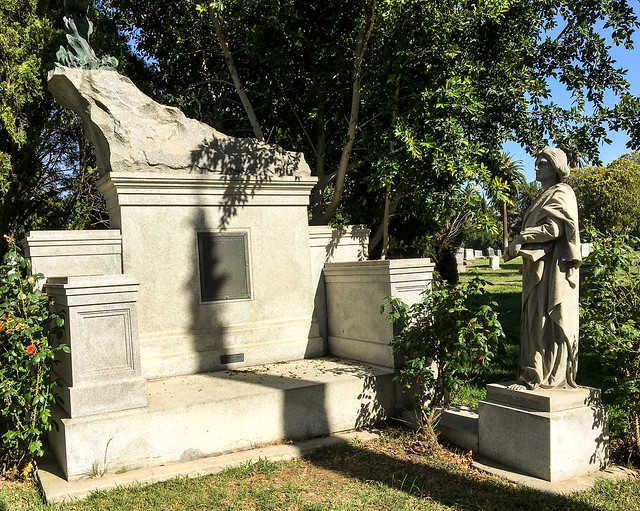