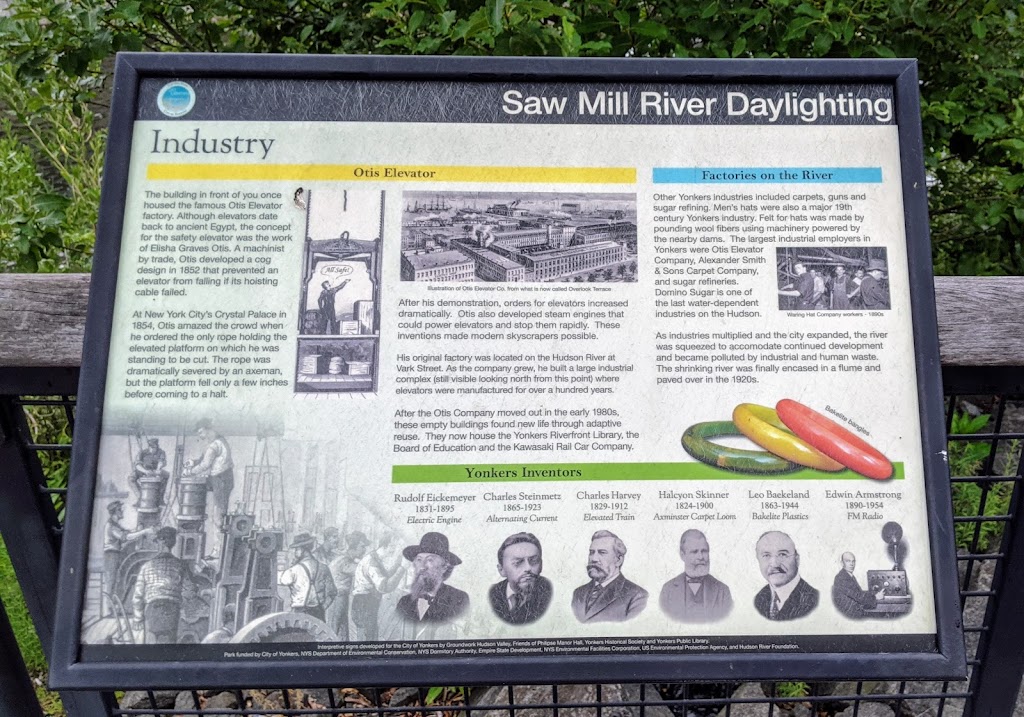 The building in front of you once housed the famous Otis Elevator factory. Although elevators date back to ancient Egypt, the concept for the safety elevator was the work of Elisha Graves Otis. A machinist by trade, Otis developed a cog design in 1852 that prevented an elevator from falling if its hoisting cable failed.

At New York City's Crystal Palace in 1854, Otis amazed the crowd when he ordered the only rope holding the elevated platform on which he was standing to be cut. The rope was dramatically severed by an axeman, but the platform fell only few inches before coming to a halt.

After his demonstration, orders for elevators increased dramatically. Otis also developed steam engines that could power elevators and stop them rapidly. These inventions made modem skyscrapers possible.

His original factory was located on the Hudson River at the company grew, he built a large industrial complex (still visible looking north from this point) where elevators were manufactured for over a hundred years.

After the Otis Company moved out in the early 1980s, these empty buildings found new life through adaptive reuse. They now house the Yonkers Riverfront Library, the Board of Education and the Kawasaki Rail Car Company.

Factories on the River
Other Yonkers industries included carpets, guns and sugar refining. Men's hats were also a major 19th century Yonkers industry. Felt for hats was made by pounding wool fibers using machinery powered by the nearby dams. The largest industrial employers in Yonkers were Otis Elevator Company, Alexander Smith & Sons Carpet Company, and sugar refineries. Domino Sugar is one of the last water-dependent industries on the Hudson.

As industries multiplied and the city expanded, the river was squeezed to accommodate continued development and became polluted by industrial and human waste. The shrinking river was finally encased in a flume and paved over in the 1920s.