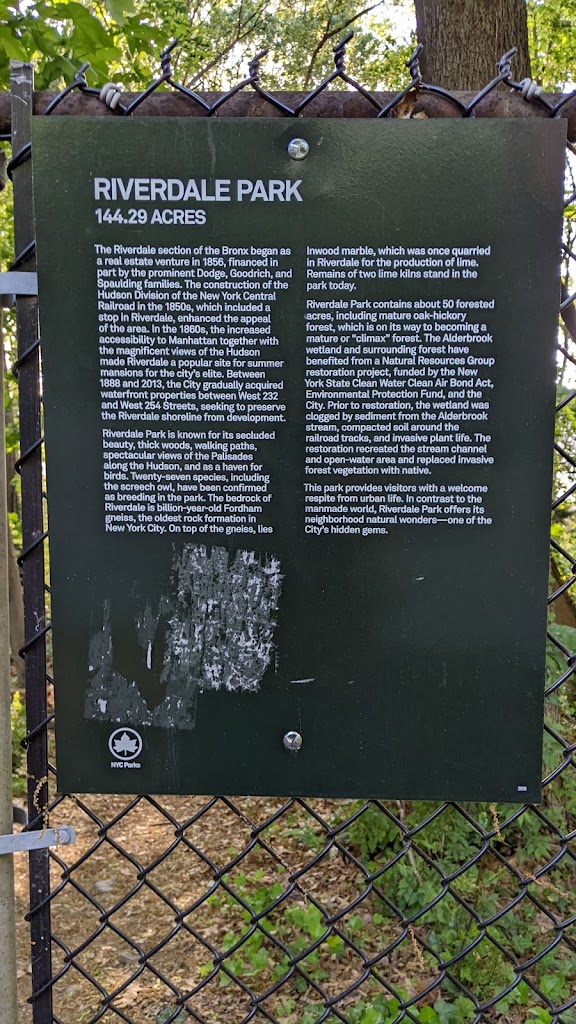 RIVERDALE PARK
144.29 ACRES
The Riverdale section of the Bronx began as a real estate venture in 1856, financed in part by the prominent Dodge, Goodrich, and Spaulding families. The construction of the Hudson Division of the New York Central Railroad in the 1850s, which included a stop in Riverdale, enhanced the appeal of the area. In the 1860s, the increased accessibility to Manhattan together with the magnificent views of the Hudson made Riverdale a popular site for summer mansions for the city's elite. Between 1888 and 2013, the City gradually acquired waterfront properties between West 232 and West 254 Streets, seeking to preserve the Riverdale shoreline from development.
Riverdale Park is known for its secluded beauty, thick woods, walking paths, spectacular views of the Palisades along the Hudson, and as a haven for birds. Twenty-seven species, including the screech owl, have been confirmed as breeding in the park. The bedrock of Riverdale is billion-year-old Fordham gneiss, the oldest rock formation in New York City. On top of the gneiss, lies Inwood marble, which was once quarried in Riverdale for the production of lime. Remains of two lime kilns stand in the park today.
Riverdale Park contains about 50 forested acres, including mature oak-hickory forest, which is on its way to becoming a mature or "climax" forest. The Alderbrook wetland and surrounding forest have benefited from a Natural Resources Group restoration project, funded by the New York State Clean Water Clean Air Bond Act, Environmental Protection Fund, and the City. Prior to restoration, the wetland was clogged by sediment from the Alderbrook stream, compacted soil around the railroad tracks, and invasive plant life. The restoration recreated the stream channel and open-water area and replaced invasive forest vegetation with native.
This park provides visitors with a welcome respite from urban life. In contrast to the manmade world, Riverdale Park offers its neighborhood natural wonders-one of the City's hidden gems.