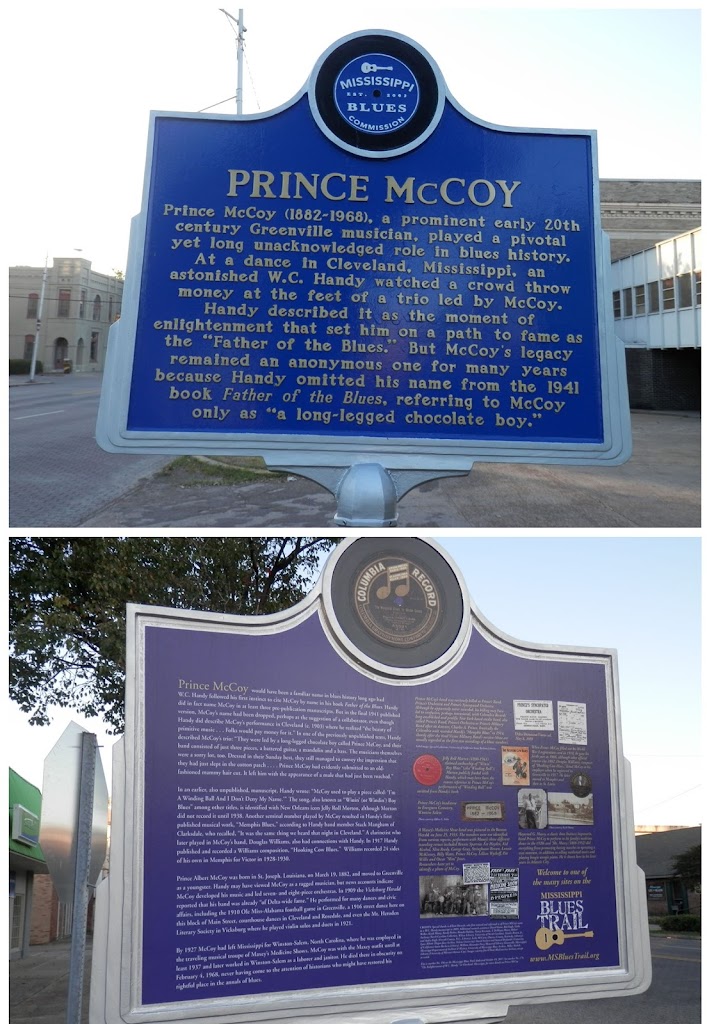 Side APrince McCoy (1882-1968), a prominent early 20th century Greenville musician, played a pivotal yet long unacknowledged role in blues history. At a dance in Cleveland, Mississippi, an astonished W.C. Handy watched a crowd throw money at the feet of a trio led by McCoy. Handy described it as the moment of enlightenment that set him on a path to fame as the “Father of the Blues.” But McCoy’s legacy remained an anonymous one for many years because Handy omitted his name from the 1941 book Father of the Blues, referring to McCoy only as “a long-legged chocolate boy.”

Side B
Prince McCoy would have been a familiar name in blues history long ago had W.C. Handy followed his first instinct to cite McCoy by name in his book Father of the Blues. Handy did in fact name McCoy in at least three pre-publication manuscripts. But in the final 1941 published version, McCoy’s name had been dropped, perhaps at the suggestion of a collaborator, even though Handy did describe McCoy’s performance in Cleveland (c. 1903) where he realized “the beauty of primitive music . . . Folks would pay money for it.” In one of the previously unpublished texts, Handy described McCoy’s trio: “They were led by a long-legged chocolate boy called Prince McCoy, and their band consisted of just three pieces, a battered guitar, a mandolin and a bass. The musicians themselves were a sorry lot, too. Dressed in their Sunday best, they still managed to convey the impression that they had just slept in the cotton patch . . . . Prince McCoy had evidently submitted to an old-fashioned mammy hair cut. It left him with the appearance of a mule that had just been roached.”

In an earlier, also unpublished, manuscript, Handy wrote: “McCoy used to play a piece called: ‘I’m A Winding Ball And I Don’t Deny My Name.’” The song, also known as “Winin’ (or Windin’) Boy Blues” among other titles, is identified with New Orleans icon Jelly Roll Morton, although Morton did not record it until 1938. Another seminal number played by McCoy resulted in Handy’s first published musical work, “Memphis Blues,” according to Handy band member Stack Mangham of Clarksdale, who recalled, “It was the same thing we heard that night in Cleveland.” A clarinetist who later played in McCoy’s band, Douglas Williams, also had connections with Handy. In 1917 Handy published and recorded a Williams composition, “Hooking Cow Blues.” Williams recorded 24 sides of his own in Memphis for Victor in 1928-1930.

Prince Albert McCoy was born in St. Joseph. Louisiana, on March 19, 1882, and moved to Greenville as a youngster. Handy may have viewed McCoy as a ragged musician, but news accounts indicate McCoy developed his music and led seven- and eight-piece orchestras. In 1909 the Vicksburg Herald reported that his band was already “of Delta-wide fame.” He performed for many dances and civic affairs, including the 1910 Ole Miss-Alabama football game in Greenville, a 1916 street dance here on this block of Main Street, courthouse dances in Cleveland and Rosedale, and even the Mt. Heroden Literary Society in Vicksburg where he played violin solos and duets in 1921.

By 1927 McCoy had left Mississippi for Winston-Salem, North Carolina, where he was employed in the traveling musical troupe of Maxey’s Medicine Shows. McCoy was with the Maxey outfit until at least 1937 and later worked in Winston-Salem as a laborer and janitor. He died there in obscurity on February 4, 1968, never having come to the attention of historians who might have restored his rightful place in the annals of blues.