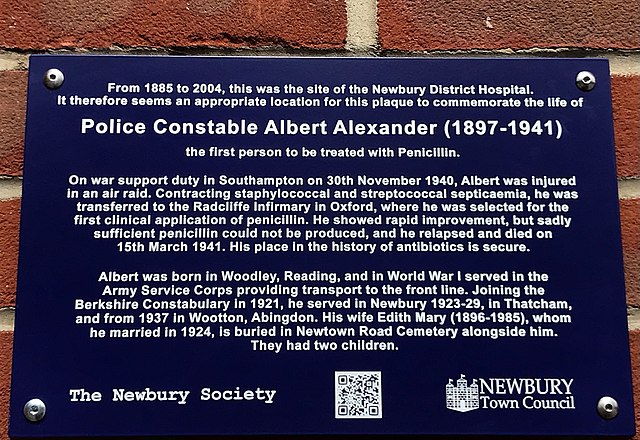 From 1885 to 2004, this was the site of the Newbury District Hospital. It therefore seems and appropriate location for this plaque to commemorate the life of Police Constable Albert Alexander (1897-1941) the first person to be treated with Penicillin. On war support duty in Southampton on 30th November 1940, Albert was injured in an air raid. Contracting staphylococcal septicaemia, he was transferred to the Radcliffe Infirmary in Oxford, where he was selected for the first clinical application of penicillin. He showed rapid improvement, but sadly sufficient penicillin could not be produced, and he relapsed and died on 15th March 1941. His place in the history of antibiotics is secure. Albert was born in Woodley, Reading, and in World Ward I served in the Army Service Corps providing transport to the front line. Joining the Berkshire Constabulary in 1921, he served Newbury 1923-29, in Thatcham, and from 1937 in Wootton, Abingdon. His wife Edith Mary (1896-1985), whim he married in 1924, is buried in Newtown Road Cemetery alongside him. They had two children.
Submitted by openplaques