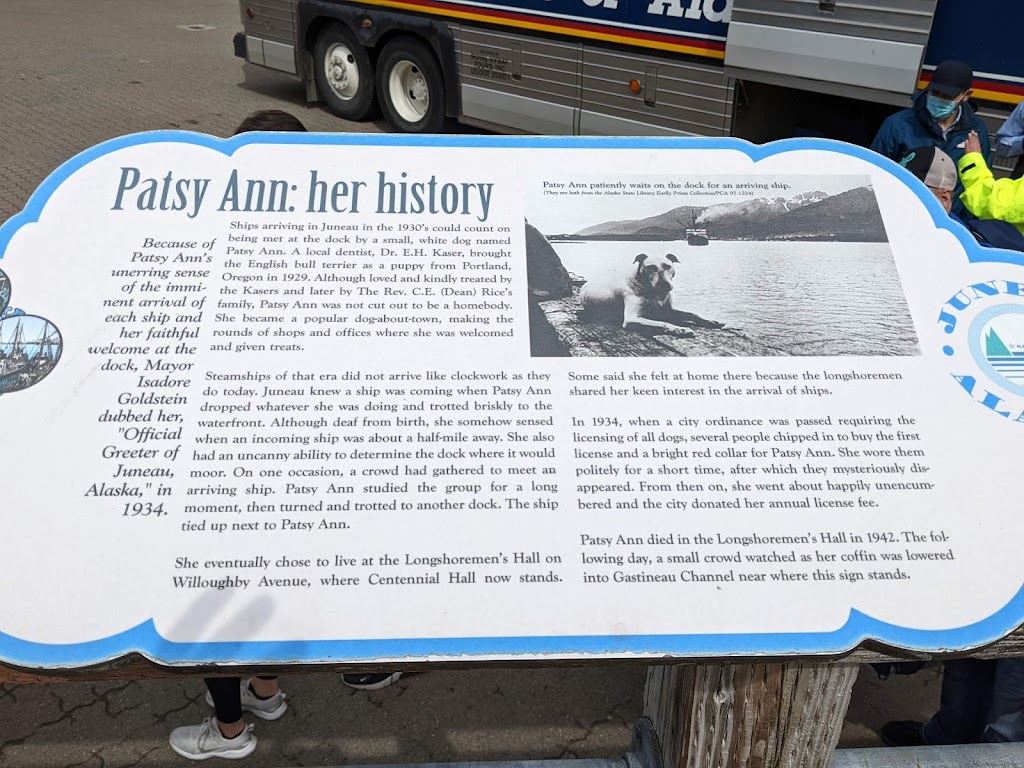 Because of Patsy Ann's unerring sense of the imminent arrival of each ship and her faithful welcome at the dock, Mayor Isadore Goldstein dubbed her, "Official Greeter of Juneau, Alaska," in 1934.

Ships arriving in Juneau in the 1930's could count on being met at the dock by a small, white dog named Patsy Ann.  A local dentist, Dr. E.H. Kaser, brought the English bull terrier as a puppy from Portland, Oregon in 1929.  Although loved and kindly treated by the Kasers and later by The Rev. C.E. (Dean) Rice's family, Patsy Ann was not cut out to be a homebody.  She became a popular dog-about-town, making the rounds of shops and offices where she was welcomed and given treats.

Steamships of that era did not arrive like clockwork as they do today.  Juneau knew a ship was coming when Patsy Ann dropped whatever she was doing and trotted briskly to the waterfront.  Although deaf from birth, she somehow sensed when an incoming ship was about a half-mile away.  She also had an uncanny ability to determine the dock where it would moor.  On one occasion, a crowd had gathered to meet an arriving ship.  Patsy Ann studied the group for a long moment, then turned and trotted to another dock.  The ship tied up next to Patsy Ann.

She eventually chose to live at the Longshoremen's Hall on Willoughby Avenue, where Centennial Hall now stands.  Some said she felt at home there because the longshoremen shared her keen interest in the arrival of ships.

In 1934, when a city ordinance was passed requiring the licensing of all dogs, several people chipped in to buy the first license and a bright red collar for Patsy Ann.  She wore them politely for a short time, after which they mysteriously disappeared.  From then on, she went about happily unencumbered and the city donated her annual license fee.

Patsy Ann died in the Longshoremen's Hall in 1942.  The following day, a small crowd watched as her coffin was lowered into Gastineau Channel near where this sign stands.

The plaque contains an image with this caption: Patsy Ann patiently waits on the dock for an arriving ship. (They are both from the Alaska State Library Early Prints Collection/PCA 97-1224)