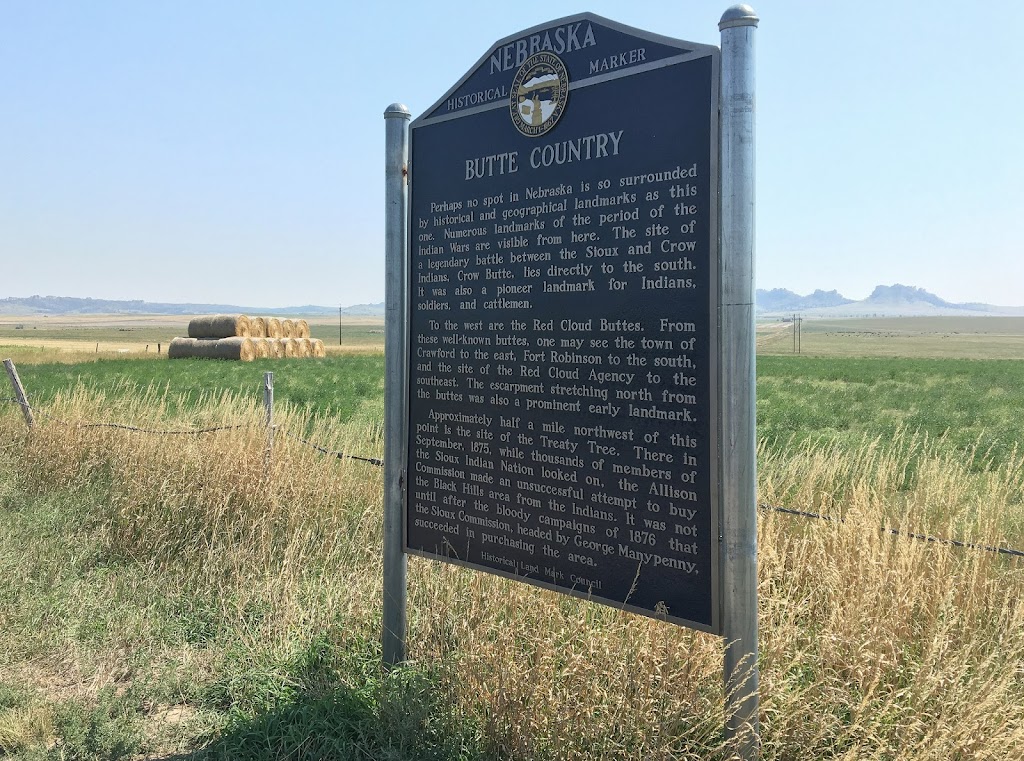 Perhaps no spot in Nebraska is so surrounded by historical and geographical landmarks as this one. Numerous landmarks of the period of the Indian Wars are visible from here. The site of a legendary battle between the Sioux and Crow Indians, Crow Butte, lies directly to the south. It was also a pioneer landmark for Indians, soldiers, and cattlemen.

To the west are the Red Cloud Buttes. From these well-known buttes, one may see the town of Crawford to the east, Fort Robinson to the south, and the site of the Red Cloud Agency to the southeast. The escarpment stretching north from the buttes was also a prominent early landmark.

Approximately half a mile northwest of this point is the site of the Treaty Tree. There in September, 1875, while thousands of members of the Sioux Indian Nation looked on, the Allison Commission made an unsuccessful attempt to buy the Black Hills area from the Indians. It was not until after the bloody campaigns of 1876 that the Sioux Commission, headed by George Manypenny, succeeded in purchasing the area.

A beautiful spot on U.S. 20, just northeast of Crawford, Nebraska. One can't help but comment on the description in the third paragraph (in the plaque text below) referencing the "purchase" of the Black Hills in 1876. In reality, the "purchase" is still disputed, 141 years after the fact.

Here's a hint, lifted from the 1980 U.S. Supreme Court decision (UNITED STATES, Petitioner, v. SIOUX NATION OF INDIANS et al.) that attempted to resolve a case that had been simmering for more than a century at that point"

[The] commission, headed by George Manypenny, arrived in the Sioux country in early September [1876] and commenced meetings with the head men of the various tribes. ... The commissioners brought with them the text of a treaty that had been prepared in advance. The principal provisions of this treaty were that the Sioux would relinquish their rights to the Black Hills and other lands west of the one hundred and third meridian, and their rights to hunt in the unceded territories to the north, in exchange for subsistence rations for as long as they would be needed to ensure the Sioux' survival. In setting out to obtain the tribes' agreement to this treaty, the commission ignored the stipulation of the Fort Laramie Treaty that any cession of the lands contained within the Great Sioux Reservation would have to be joined in by three-fourths of the adult males. Instead, the treaty was presented just to Sioux chiefs and their leading men. It was signed by only 10% of the adult male Sioux population.13

Congress resolved the impasse by enacting the 1876 "agreement" into law as the Act of Feb. 28, 1877. The Act had the effect of abrogating the earlier Fort Laramie Treaty, and of implementing the terms of the Manypenny Commission's "agreement" with the Sioux leaders.

The passage of the 1877 Act legitimized the settlers' invasion of the Black Hills, but throughout the years it has been regarded by the Sioux as a breach of this Nation's solemn obligation to reserve the Hills in perpetuity for occupation by the Indians. One historian of the Sioux Nation commented on Indian reaction to the Act in the following words:

"The Sioux thus affected have not gotten over talking about that treaty yet, and during the last few years they have maintained an organization called the Black Hills Treaty Association, which holds meetings each year at the various agencies for the purpose of studying the treaty with the intention of presenting a claim against the government for additional reimbursements for the territory ceded under it. Some think that Uncle Sam owes them about $9,000,000 on the deal, but it will probably be a hard matter to prove it." F. Fiske, The Taming of the Sioux (1917).

Fiske's words were to prove prophetic.