Natchez Under-the-Hill and the Steamboat Era 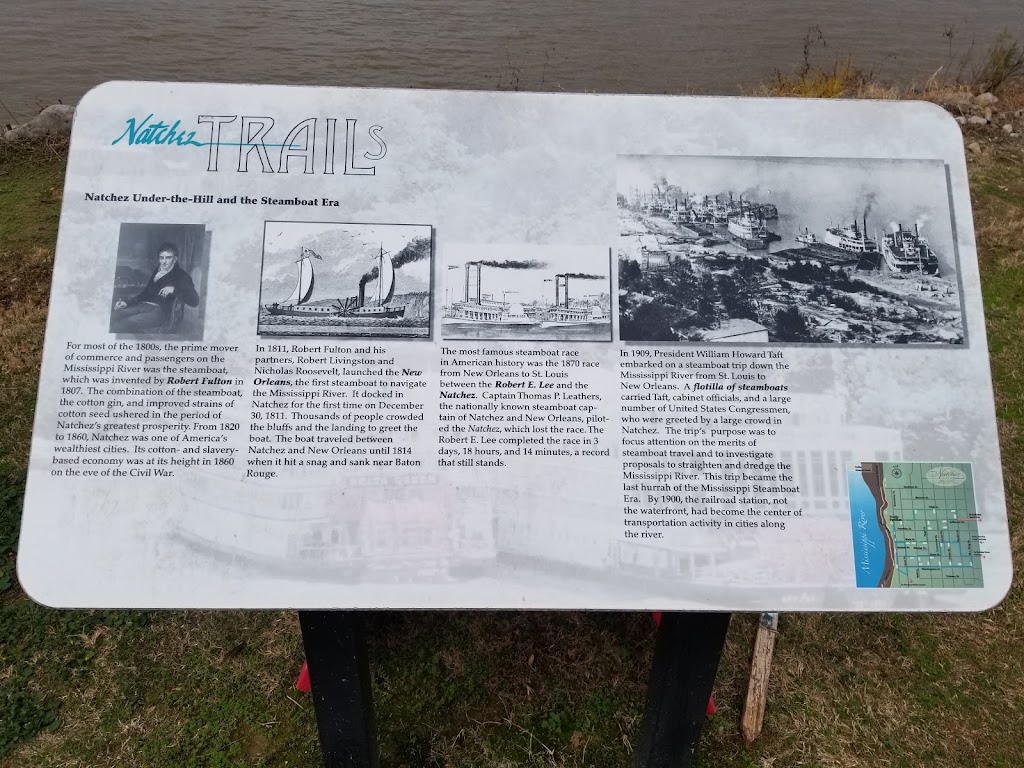 For most of the 1800s, the prime mover of commerce and passengers on the Mississippi River was the steamboat, which was invented by Robert Fulton in 1807. The combination of the steamboat, the cotton gin, and improved strains of cotton seed ushered in the period of Natchez's greatest prosperity. From 1820 to 1860, Natchez was one of America's wealthiest cities. Its cotton- and slavery-based economy was at its height in 1860 on the eve of the Civil War.

In 1811, Robert Fulton and his partners, Robert Livingston and Nicholas Roosevelt, launched the New Orleans, the first steamboat to navigate the Mississippi River. It docked in Natchez for the first time on December 30, 1811. Thousands of people crowded the bluffs and the landing to greet the boat. The boat traveled between Natchez and New Orleans until 1814 when it hit a snag and sank near Baton Rouge.

The most famous steamboat race in American history was the 1870 race from New Orleans to St. Louis between the Robert E. Lee and the Natchez. Captain Thomas P. Leathers, the nationally known steamboat captain of Natchez and New Orleans, piloted the Natchez, which lost the race. The Robert E. Lee completed the race in 3 days, 18 hours, and 14 minutes, a record that still stands.

In 1909, President William Howard Taft embarked on a steamboat trip down the Mississippi River from St. Louis to New Orleans. A flotilla of steamboats carried Taft, cabinet officials, and a large number of United States Congressmen, who were greeted by a large crowd in Natchez. The trip's purpose was to focus attention on the merits of I steamboat travel and to investigate proposals to straighten and dredge the Mississippi River. This trip became the last hurrah of the Mississippi Steamboat Era. By 1900, the railroad station, not the waterfront, had become the center of transportation activity in cities along the river.