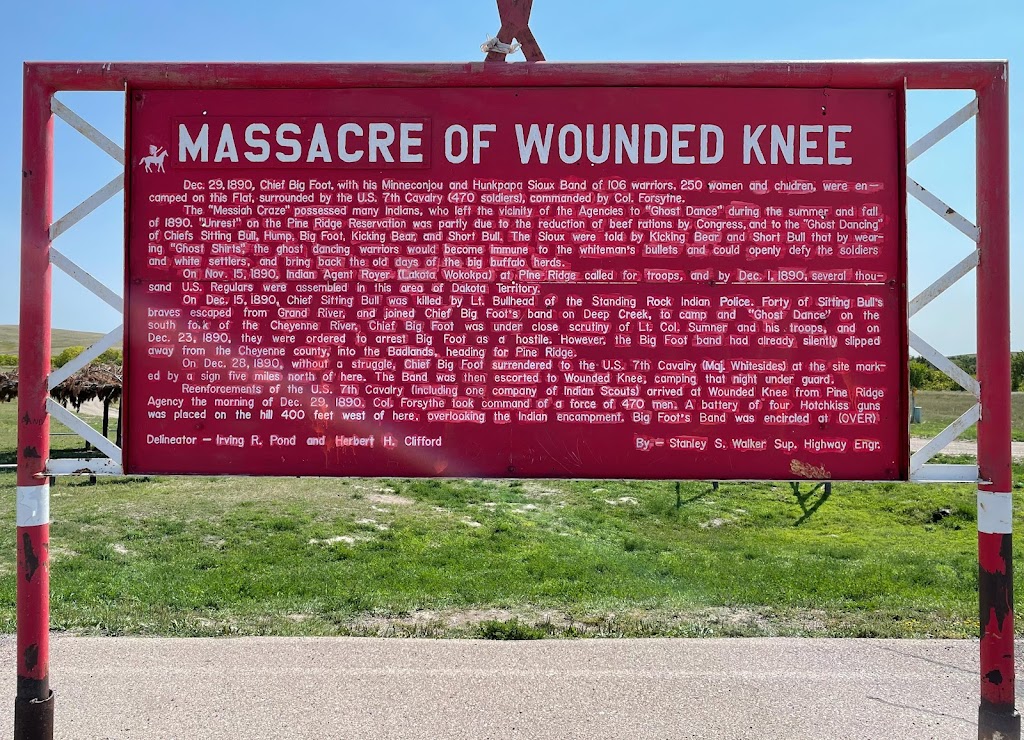 It's well known that this is a contested piece of ground and a contested piece of history. It's also an episode that remains an open wound, largely because Congress saw fit to bestow the nation's highest military decoration, the Medal of Honor, on 20 soldiers who took part in the slaughter of hundreds of destitute and nearly defenseless Native Americans. As another reminder that "the past is never dead — it's not even past," those medals are the target of an ongoing campaign to get them rescinded. (Meantime, Congress in 1990 got around to acknowledging Wounded Knee as a massacre and went so far as to express "deep regret" for the incident.

Since the 1950s at least, when the state of South Dakota erected the first formal markers commemorating the 1890 event, the massacre has had a way of crowding into the present. Dee Brown's "Bury My Heart at Wounded Knee: An Indian History of the American West" came out in 1970. The memorial site was the epicenter of the American Indian Movement staged its rebellion and federal government siege in 1973. And the sign is just a few hundred feet from the hilltop cemetery where many of the 1890 massacre victims were buried in a mass grave.

The history of the signs at the site is one small indication of the evolving view of what happened here: The first one the Oglala Sioux put up, around 1960, was titled "Site of the Wounded Knee Tragedy." A later version at the same site — and which was in place at the start of the 1973 uprising — carried the title "Battle of Wounded Knee." The sign got an impromptu edit during the siege. The earliest picture I can find of the current sign is from about 20 years ago, but I'm guessing it was in place well before that; it could plausibly date back to the massacre centennial in 1990.  The paint scheme was different and a little hard to read — white print on a light turquoise background.  But one prominent feature — the word "massacre" bolted over an original that may have said "battle" — was already in place. The paint scheme was changed to the current white on red around 2010 to 2011.

Full plaque text for both side one, pictured here, and side two:

Dec. 29, 1890, Chief Big Foot, with his Minneconjou and Hunkpapa Sioux Band of 106 warriors, 250 women and children, were encamped on this flat, surrounded by the U.S. 7th Cavalry (470 soldiers), commanded by Col. Forsythe.

The "Messiah Craze" possessed many Indians, who left the vicinity of the Agencies to "Ghost Dance" during the summer and fall of 1890. "Unrest" on the Pine Ridge Reservation was partly due to the reduction of beef rations by Congress, and to the "Ghost Dancing" of Chiefs Sitting Bull, Hump, Big Foot, Kicking Bear and Short Bull. The Sioux were told by Kicking Bear and Short Bull that by wearing "Ghost Shirts", the ghost dancing warriors would become immune to the whiteman's bullets and could openly defy the soldiers and white settlers, and bring back the old days of the big buffalo herds.

On Nov. 15, 1890, Indian Agent Royer (Lakota Wokokpa) at Pine Ridge called for troops, and by Dec. 1, 1890, several thousand U.S. Regulars were assembled in this area of Dakota Territory.

On Dec. 15, 1890, Chief Sitting Bull was killed by Lt. Bullhead of the Standing Rock Indian Police. Forty of Sitting Bull's braves escaped from Grand River, and joined Chief Big Foot's band on Deep Creek, to camp and "Ghost Dance" on the south fork of the Cheyenne River. Chief Big Foot was under close scrutiny of Lt. Col. Sumner and his troops, and on Dec. 23, 1890, they were ordered to arrest Big Foot as a hostile. However, the Big Foot band had already silently slipped away from the Cheyenne county, into the Badlands, heading for Pine Ridge.

On Dec. 28, 1890, without a struggle, Chief Big Foot surrendered to the U.S. 7th Cavalry (Maj. Whitesides) at the site marked by a sign five miles north of here. The Band was then escorted to Wounded Knee, camping that night under guard.

Reenforcements of the U.S. 7th Cavalry (including one company of Indian Scouts) arrived at Wounded Knee from Pine Ridge Agency the morning of Dec. 29, 1890. Col. Forsythe took command of a force of 470 men. A battery of four Hotchkiss guns was placed on the hill 400 feet west of here, overlooking the Indian encampment. Big Foot's Band was encircled at 9:00 a.m. by a line of foot soldiers and cavalry. Chief Big Foot, sick with pneumonia, lay in a warmed tent provided by Col. Forsythe, in the center of the camp. A white flag flew there, placed by the Indians. Directly in the rear of the Indian Camp was a dry draw, running east and west.

The Indians were ordered to surrender their arms before proceeding to Pine Ridge. Capt. Wallace, with an Army detail, began searching the teepees for hidden weapons. During this excitement, Yellow Bird, a medicineman, walked among the braves, blowing on an eaglebone whistle, inciting the warriors to action, declaring that the "Ghost Shirts" worn by the warriors would protect them from the soldier's bullets. A shot was fired, and all hell broke loose. The troops fired a deadly volley into the Council warriors, killing nearly half of them. A bloody hand-to-hand struggle followed, all the more desperate since the Indians were armed mostly with clubs, knives, and revolvers. The Hotchkiss guns fired 2-pound explosive shells on the groups, indiscriminately killing warriors, women, children, and their own disarming soldiers. Soldiers were killed by cross-fire of their comrades in this desperate engagement.

Surviving Indians stampeded in wild disorder for the shelter of the draw 200 feet to the south, escaping west and east in the draw, and north down Wounded Knee Creek. Persuit by the 7th Cavalry resulted in the killing of more men, women and children, causing this battle to be referred to as the "Wounded Knee Massacre". One hour later, 146 Indian men, women and children lay dead in Wounded Knee Creek valley. The bodies of many were scattered along a distance of two miles from the scene of the encounter. Twenty soldiers were killed on the field, and sixteen later died of wounds. Wounded soldiers and Indians alike were taken to Pine Ridge Agency. A blizzard came up. Four days later, an Army detail gathered up the Indian dead and buried them in a common grave at the top of the hill northwest of here. A monument marks this grave.

"Ghost Dancing" ended with this encounter. The Wounded Knee battlefield is the site of the last armed conflict between the Sioux Indians and the United States Army.