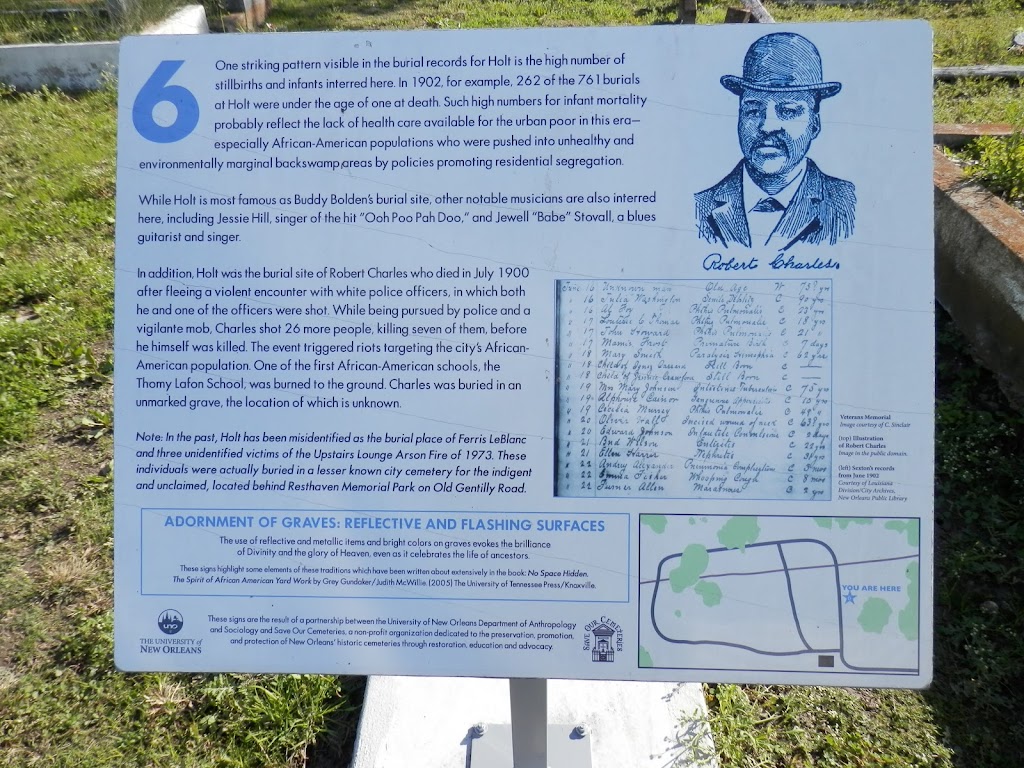 One striking pattern visible in the burial records for Holt is the high number of stillbirths and infants interred here. In 1902, for example, 262 of the 761 burials at Holt were under the age of one at death. Such high numbers for infant mortality probably reflect the lack of health care available for the urban poor in this era- especially African-American populations who were pushed into unhealthy and environmentally marginal backswamp, areas by policies promoting residential segregation.

While Holt is most famous as Buddy Bolden's burial site, other notable musicians are also interred here, including Jessie Hill, singer of the hit "Ooh Poo Pah Doo,” and Jewell "Babe” Stovall, a blues guitarist and singer.

In addition, Holt was the burial site of Robert Charles who died in July 1900 after fleeing a violent encounter with white police officers, in which both he and one of the officers were shot. While being pursued by police and a vigilante mob, Charles shot 26 more people, killing seven of them, before he himself was killed. The event triggered riots targeting the city's African- American population. One of the first African-American schools, the Thomy Lafon School, was burned to the ground. Charles was buried in an unmarked grave, the location of which is unknown.

Note: In the past, Holt has been misidentified as the burial place of Ferris LeBlanc and three unidentified victims of the Upstairs Lounge Arson Fire of 1973. These individuals were actually buried in a lesser known city cemetery for the indigent and unclaimed, located behind Resthaven Memorial Park on Old Gentilly Road.

ADORNMENT OF GRAVES: REFLECTIVE AND FLASHING SURFACES
The use of reflective and metallic items and bright colors on graves evokes the brilliance of Divinity and the glory of Heaven, even as it celebrates the life of ancestors.

These signs highlight some elements of these traditions which have been written about extensively in the book: No Space Hidden. The Spirit of African American Yard Work by Grey Gundaker/Judith McWillie. (2005) The University of Tennessee Press/Knoxville.