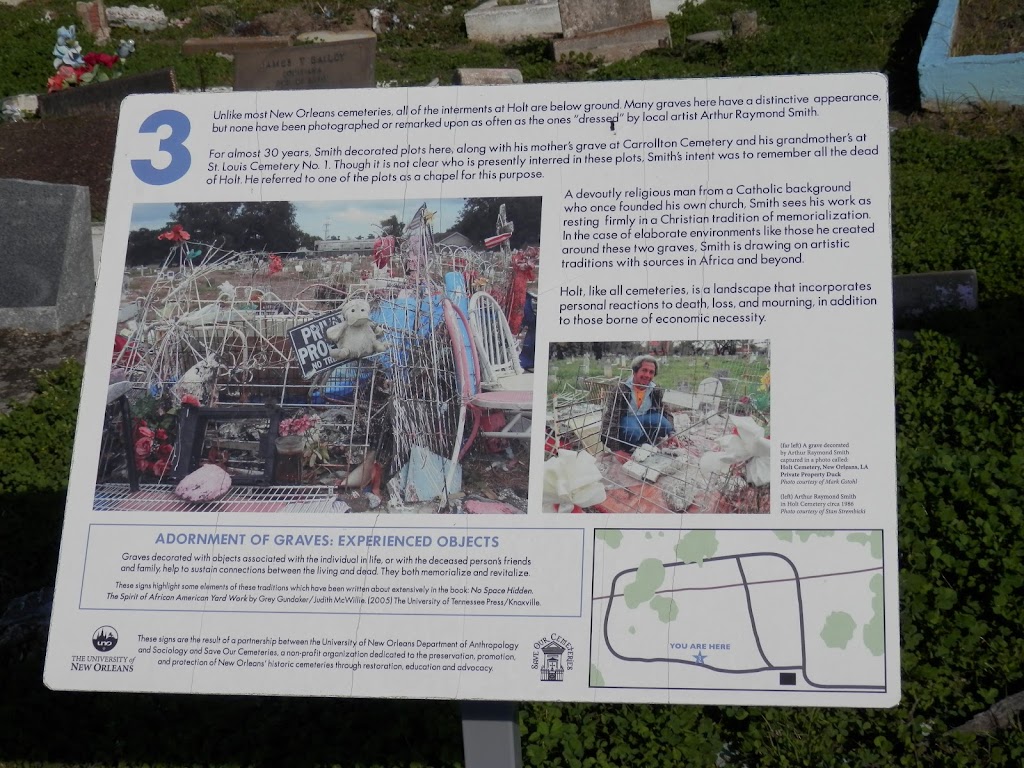 Unlike most New Orleans cemeteries, all of the interments at Holt are below ground. Many graves here have a distinctive appearance, but none have been photographed or remarked upon as often as the ones "dressed” by local artist Arthur Raymond Smith.

For almost 30 years, Smith decorated plots here, along with his mother's grave at Carrollton Cemetery and his grandmother's at St. Louis Cemetery No. 1. Though it is not clear who is presently interred in these plots, Smith's intent was to remember all the dead of Holt. He referred to one of the plots as a chapel for this purpose.

A devoutly religious man from a Catholic background who once founded his own church, Smith sees his work as resting firmly in a Christian tradition of memorialization. In the case of elaborate environments like those he created around these two graves, Smith is drawing on artistic traditions with sources in Africa and beyond.

Holt, like all cemeteries, is a landscape that incorporates personal reactions to death, loss, and mourning, in addition to those borne of economic necessity.

Adornment of Graves: Experienced Objects
Graves decorated with objects associated with the individual in life, or with the deceased person's friends and family, help to sustain connections between the living and dead. They both memorialize and revitalize.

These signs highlight some elements of these traditions which have been written about extensively in the book: No Space Hidden. The Spirit of African American Yard Work by Grey Gundaker/Judith McWillie. (2005) The University of Tennessee Press/Knoxville.

These signs are the result of a partnership between the University of New Orleans Department of Anthropology and Sociology and Save Our Cemeteries, a non-profit organization dedicated to the preservation, promotion, and protection of New Orleans' historic cemeteries through restoration, education and advocacy.