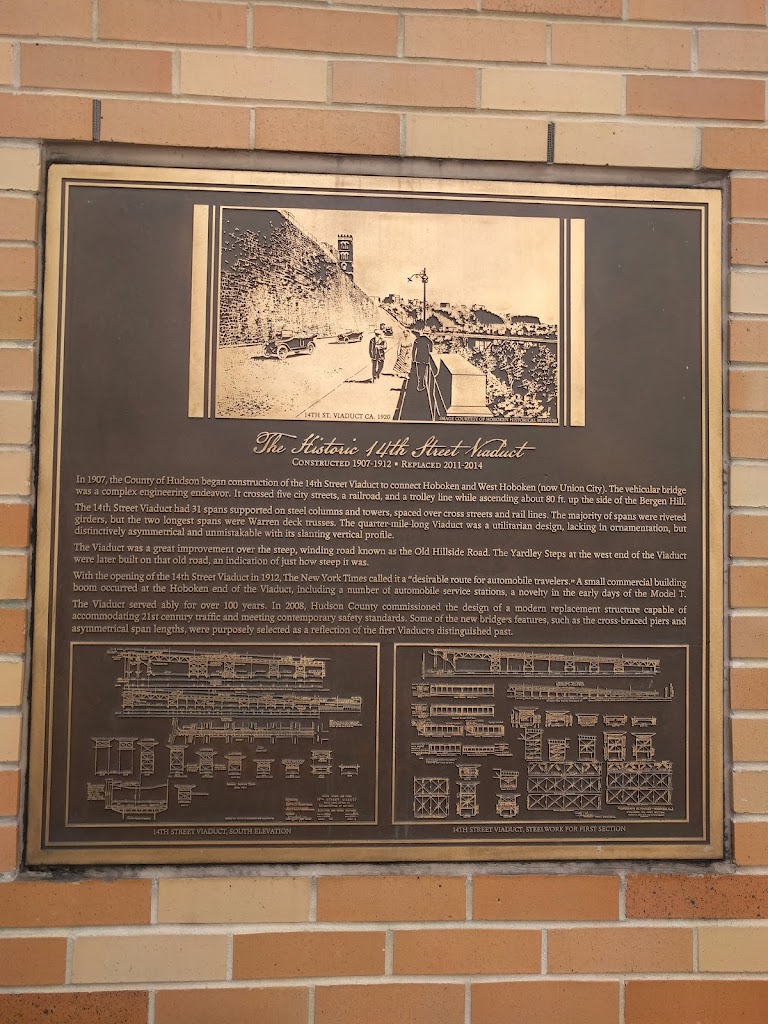 In 1907, the County of Hudson becan construction of the 14th Street Viaduct to connect Hoboken and West Hoboken (now Union City). The vehicular bridge was a complex engineering endeavor. It crossed five city streets, a railroad, and a trolley line while ascending about 80 ft. up the side of the Bergen Hill.

The 14th Street Viaduct had 31 spans supported on steel columns and towers, spaced over cross streets and rail lines. The majority of spans were riveted girders, but the two longest spans were Warren deck trusses. The quarter-mile-long Viaduct was a utilitarian design, lacking in ornamentation, but distinctively asymmetrical and unmistakable with its slanting vertical profile.

The Viaduct was a great improvement over the steep, winding rod known as the Old Hillside Road. The Yardley Steps at the west end of the Viaduct were later build on that road, an indication of just how steep it was.

With the opening of the 14th Street Viaduct in 1912, The New York Times called it a "desirable route for automobile travelers." A small commercial building boom occurred at the Hoboken end of the Viaduct, including a number of automobile service stations, a novelty in the early days of the Model T.

The Viaduct served ably for over 100 years. In 2008, Hudson County commissioned the design of a modern replacement structure capable of accommodating 21st century traffic and meeting contemporary safety standards. Some of the new bridge's features, such as the cross-braces piers and

asymmetrical span lengths, were purposely selected as a reflection of the first Viaduct's distinguished past.