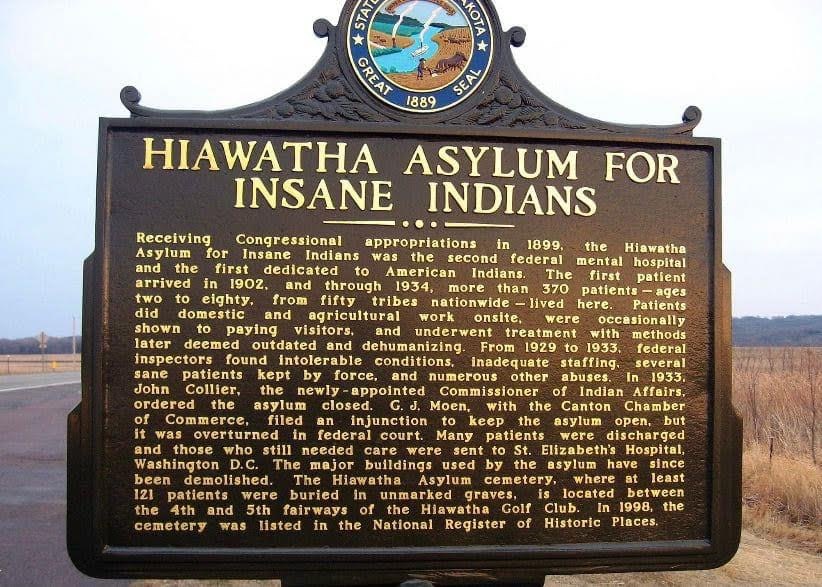 HIAWATHA ASYLUM FOR
INSANE INDIANS
Receiving Congressional appropriations in 1899. the Hiawatha
Asylum for Insane Indians was the second federal mental hospital
and the first dedicated to American. Indians. The first patient
arrived in 1902. and through 1934, more than 370 patients - ages
two to eighty, from fifty tribes nationwide- lived here. Patients
did domestic and agricultural work onsite. were occasionally
shown to paying visitors. and underwent treatment with methods
later deemed outdated and dehumanizing. From 1929 to 1933. federal
inspectors found Intolerable conditions. Inadequate staffing. several
sane patients kept by force, and numerous other abuses. In 1933.
John Collier, the newly-appointed Commissioner of Indian Affairs.
ordered the asylum closed. G. J. Moen, with the Canton Chamber
of Commerce, filed an injunction to keep the asylum open, but
It was overturned in federal court. Many patients were discharged
and those who still needed care were sent to St. Elizabeth's Hospital,
Washington D.C. The major buildings used by the asylum have since
been demolished. The Hiawatha Asylum cemetery. where at least
121 patients were burled in unmarked graves. is located between
the 4th and 5th fairways of the Hiawatha Golf Club. In 1998, the
cemetery was listed in the National Register of Historic Places