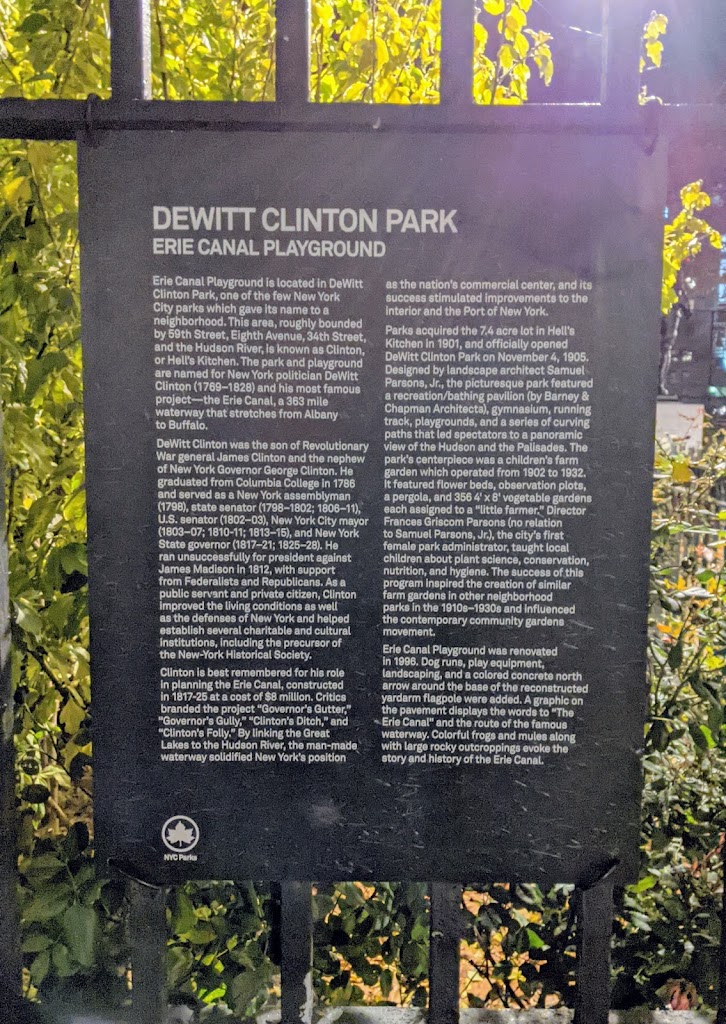 Erie Canal Playground is located in DeWitt Clinton Park, one of the few New York City parks which gave its name to a neighborhood. This area, roughly bounded by 59th Street, Eighth Avenue, 34th Street, and the Hudson River, is known as Clinton, or Hell's Kitchen. The park and playground are named for New York politician DeWitt Clinton (1769-1828) and his most famous project-the Erie Canal, a 363 mile waterway that stretches from Albany to Buffalo.

DeWitt Clinton was the son of Revolutionary War general James Clinton and the nephew New York Governor George Clinton. He graduated from Columbia College in 1786 and served as a New York assemblyman (1798), state senator (1798-1802; 1806-11), U.S. senator (1802-03), New York City mayor (1803-07; 1810-11; 1813-15), and New York State governor (1817-21; 1825-28). He ran unsuccessfully for president against James Madison in 1812, with support from Federalists and Republicans. As a public servant and private citizen, Clinton improved the living conditions as well as the defenses of New York and helped establish several charitable and cultural institutions, including the precursor of the New-York Historical Society.

Clinton is best remembered for his role in planning the Erie Canal, constructed in 1817-25 at a cost of $8 million. Critics branded the project "Governor's Gutter," "Governor's Gully," "Clinton's Ditch," and "Clinton's Folly." By linking the Great Lakes to the Hudson River, the man-made waterway solidified New York's position as the nation's commercial center, and its success stimulated improvements to the Interior and the Port of New York.

Parks acquired the 7.4 acre lot in Hell's Kitchen in 1901, and officially opened DeWitt Clinton Park on November 4, 1905. Designed by landscape architect Samuel Parsons, Jr., the picturesque park featured a recreation/bathing pavilion (by Barney & Chapman Architects), gymnasium, running track, playgrounds, and a series of of curving 1932. paths that led spectators to a panoramic view of the Hudson and the Palisades. The park's centerpiece was a children's farm garden n which operated from 1902 to It featured flower beds, observation plots, a pergola, and 356 4' x 8' vegetable gardens vegetable each assigned to a "little farmer." Director Frances Griscom Parsons (no relation to Samuel Parsons, Jr.), the city's first female park administrator, taught local children about plant science, conservation, nutrition, and hygiene. The success of this program inspired the creation of similar farm gardens in other neighborhood parks in the 1910s-1930s and influenced the contemporary community gardens movement.

Erie Canal Playground was renovated in 1996. Dog runs, play equipment, landscaping, and a colored concrete north arrow around the base of the reconstructed yardarm flagpole were added. A graphic on the pavement displays the words to "The Erie Canal" and the route of the famous waterway. Colorful frogs and mules along with large rocky outcroppings evoke the story and history of the Erie Canal.