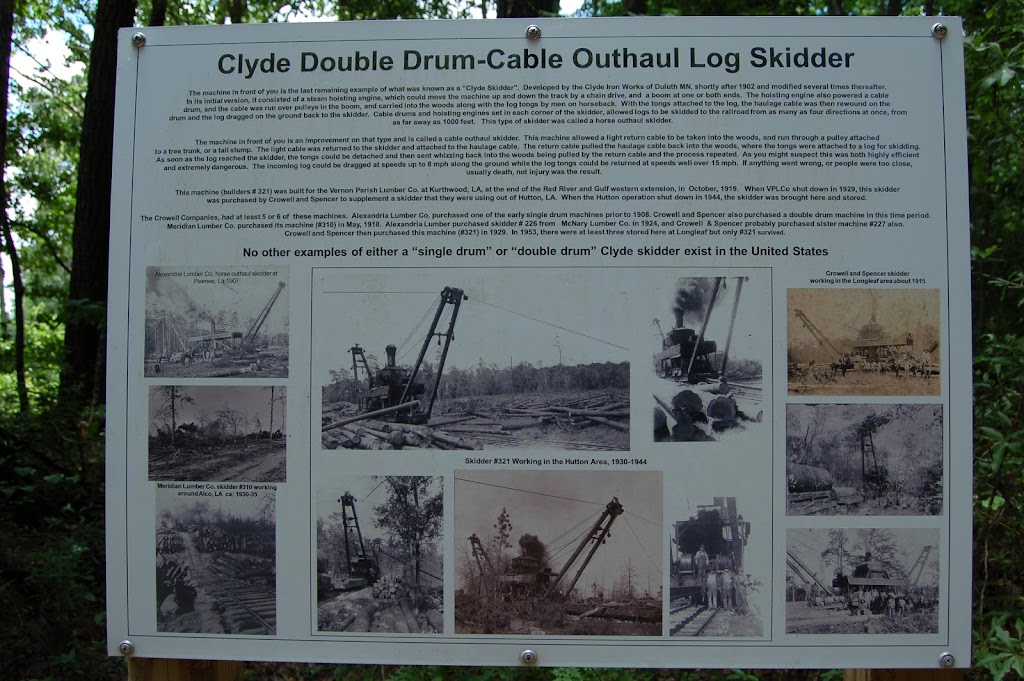 The machine In front of you is the last remaining example of what was known as a "Clyde Skidder". Developed by the Clyde Iron Works of Duluth MN, shortly after 1902 and modified several times thereafter. In its initial version, it consisted of a steam hoisting engine, which could move the machine up and down the track by a chain drive, and a boom at one or both ends. The hoisting engine also powered a cable drum, and the cable was run over pulleys in the boom, and carried into the woods along with the log tongs by men on horseback. With the tongs attached to the log, the haulage cable was then rewound on the drum and the log dragged on the ground back to the skidder. Cable drums and hoisting engines set in each corner of the skidder, allowed logs to be skidded to the railroad from as many as four directions at once, from as far away as 1000 feet. This type of skidder was called a horse outhaul skidder.

The machine in front of you is an improvement on that type and is called a cable outhaul skidder. This machine allowed a light return cable to be taken into the woods, and run through a pulley attached to a tree trunk, or a tall stump. The light cable was returned to the skidder and attached to the haulage cable. The return cable pulled the haulage cable back into the woods, where the tongs were attached to a log for skidding. As soon as the log reached the skidder, the tongs could be detached and then sent whining back into the woods being pulled by the return cable and the process repeated. As you might suspect this was both highly efficient and extremely dangerous. The Incoming log could be dragged at speeds up to 8 mph along the ground while the log tongs could be returned at speeds well over 15 mph. If anything went wrong, or people were too close, usually death, not injury was the result.

This machine (builders # 321) was built for the Vernon Parish Lumber Co. at Kurthwood, LA, at the end of the Red River and Gulf western extension, in October, 1919. When VPLCo shut down in 1929. this skidder was purchased by Crowell and Spencer to supplement a skidder that they were using out of Hutton, LA. When the Hutton operation shut down in 1944, the skidder was brought here and stored.

The Crowell Companies, had at least 5 or 6 of these machines. Alexandria Lumber Co. purchased one of the early single drum machines prior to 1908. Crowell and Spencer also purchased a double drum machine in this time period. Meridian Lumber Co. purchased its machine (#310) in May, 1918. Alexandria Lumber purchased skidder #226 from McNary Lumber Co. in 1924, and Crowell & Spencer probably purchased sister machine #227 also. Crowell and Spencer then purchased this machine (#321) in 1929. In 1953, there were at least three stored here at Longleaf but only #321 survived.

No other examples of either a "single drum" or "double drum" Clyde skidder exist in the United States.