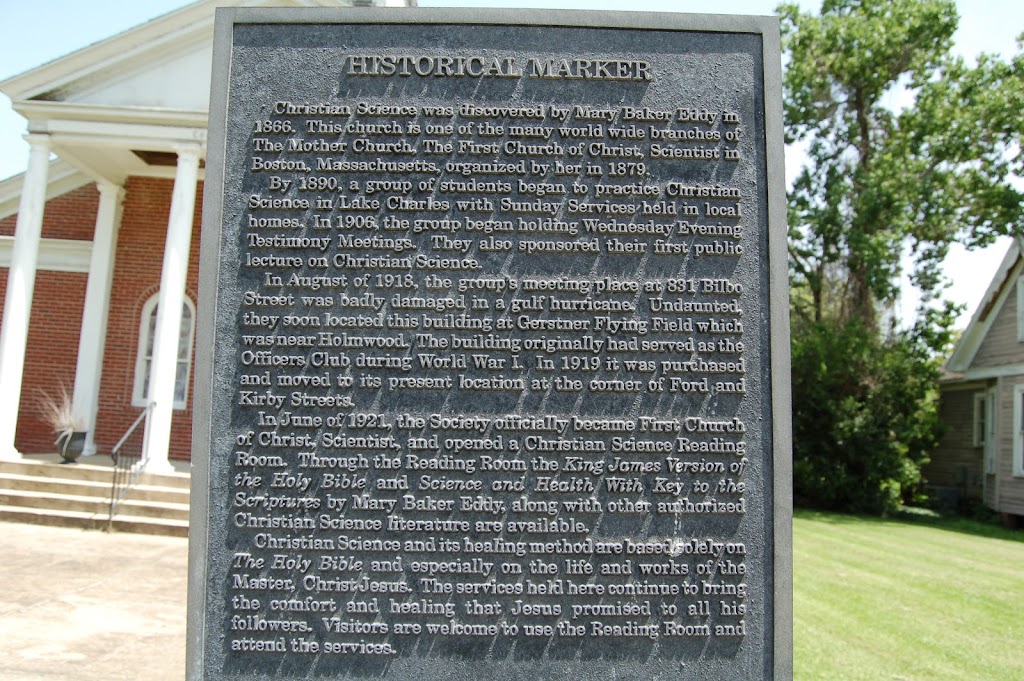 Christian Science was discovered by Mary Baker Eddy in 1866. This church is one of the many world wide branches of The Mother Church, The First Church of Christ, Scientist, in Boston, Massachusetts, organized by her in 1879.

By 1890, a group of students began to practice Christian Science in Lake Charles with Sunday Services held in local homes. In 1906, this group began holding Wednesday Evening Testimony Meetings. They also sponsored their first public lecture on Christian Science.

In August of 1918, the group's meeting place at 331 Bilbo Street was badly damaged in a gulf hurricane. Undaunted, they soon located this building at Gerstner Flying Field which was near Holmwood. The building originally had served as the Officers Club during World War I. In 1919 it was purchased and moved to its present location at the corner of Ford and Kirby Streets.

In June of 1921, the Society officially became First Church of Christ, Scientist, and opened a Christian Science Hearing Room. Through the Reading Room the King James Version of the Holy Bible and Science and Health With Key to the Scriptures by Mary Baker Eddy along    with other authorized Christian Science literature are available.

Christian Science and its healing method are based solely on The Holy Bible and especially on the life and works of the Master, Christ Jesus. The services held here continue to bring the comfort and healing that Jesus promised to all his followers. Visitors are welcome to use the Reading Room and extend the services.