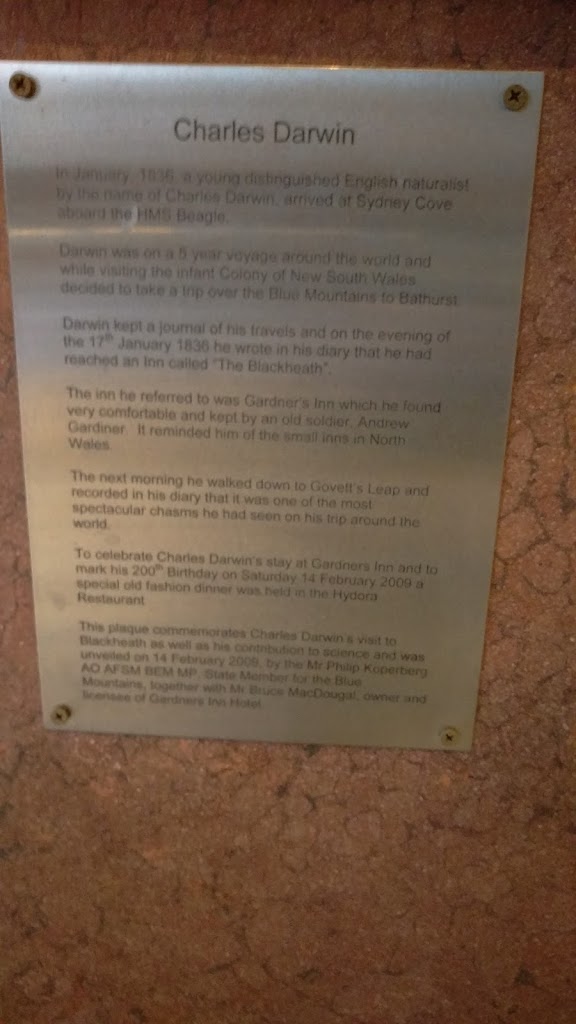 Attached to the wall in the doorway of the Gardner's Inn pub.

In January 1836 a young distinguished English naturalist by the name of Charles Darwin, arrived at Sydney Cove aboard the HMS Beagle.

Darwin was on a 5 year voyage around the world and while visiting the infant Colony of New South Wales decided to take a trip over the Blue Mountains to Bathurst.

Darwin kept a journal of his travels and on the evening of the 17th January 1836 he wrote in his diary that he had reached and Inn called "The Blackheath".

The inn he referred to was Gardner's inn which he found very comfortable and kept by an old soldier, Andrew Gardiner. It reminded him of the small inns in North Wales.

The next morning he walked down to Govett's Leap and recorded in his diary that it was one of the most spectacular chasms he had seen on his trip around the world.

To celebrate Charles Darwin's stay at Gardners Inn and to mark his 200th Birthday on Saturday 14 February 2009 a special old fashion dinner was held in the Hydora Restaurant.

This plaque commemorates Charles Darwin's visit to Blackheath as we as his contribution to science and was unveiled on 14 February 2009, by the Mr Philip  Koperberg AO AFSM BEM MP, State Member for the Blue Mountains together with Mr Bruce MacDougal, owner and licensee of Gardeners Inn Hotel'