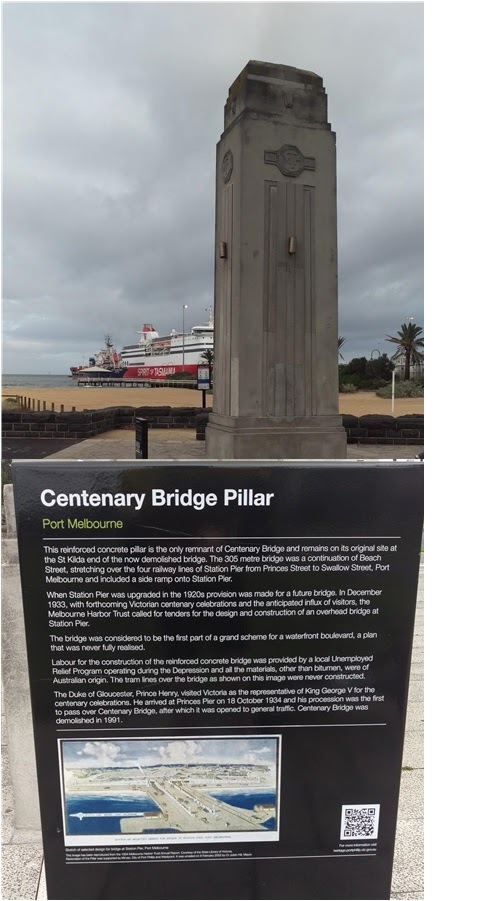 This reinforced concrete pillar is the only remnant of Centenary Bridge and remains on its original site at the St Kilda end of the now demolished bridge. The 305 metre bridge was a continuation of Beach Street, stretching over the four railway lines of Station Pier from Princes Street to Swallow Street, Port Melbourne and included a side ramp onto Station Pier.

When Station Pier was upgraded in the 1920s provision was made for a future bridge. In December 1933, with forthcoming Victorian centenary celebrations and the anticipated influx of visitors, the Melbourne Harbour Trust called for tenders for the design and construction of an overhead bridge at Station Pier.

The bridge was considered to be the first part of a grand scheme for a waterfront boulevard, a plan that was never fully realised.

Labour for the construction of the reinforced concrete bridge was provided by a local Unemployed Relief Program operating during the Depression and all the materials other than bitumen, were of Australian origin. The tram lines over the bridge as shown on this image were never constructed.

The Duke of Gloucester, Prince Henry, visited Victoria as the representative of King George V for centenary celebrations. He arrived at Princes Pier on 18 October 1934 and his procession was the first to pass over the Centenary Bridge, after which it was opened to general traffic. Centenary Bridge was demolished in 1991.