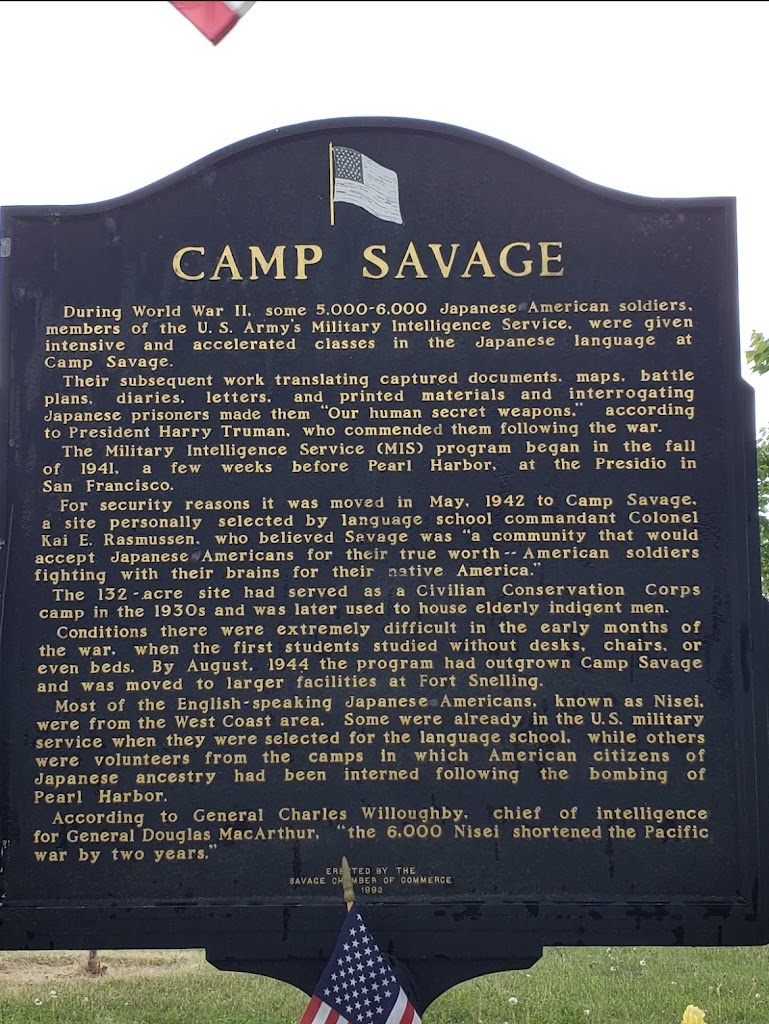 During World War Il, some 5,000-6.000 Japanese American soldiers, members of the U. S. Army's Military Intelligence Service, were given intensive and accelerated classes in the Japanese language at Camp Savage.
Their subsequent work translating captured documents, maps, battle plans, diaries, letters, and printed materials and interrogating Japanese prisoners made them "Our human secret weapons,” according to President Harry Truman, who commended them following the war.
The Military Intelligence Service (MS) program began in the fall of 1941, a few weeks before Pearl Harbor, at the Presidio in San Francisco.
For security reasons it was moved in May, 1942 to Camp
Savage. a site personally selected by language school commandant Colonel Kai E. Rasmussen, who believed Savage was "a community that would accept Japanese Americans for their true worth - American soldiers fighting with their brains for their native America.”
The 132-acre site had served as a Civilian Conservation Corps camp in the 1930s and was later used to house elderly indigent men.
Conditions there were extremely difficult in the early months of the war. when the first students studied without desks, chairs. or even beds. By August, 1944 the program had outgrown Camp Savage and was moved to larger facilities at Fort Snelling.
Most of the English-speaking Japanese Americans, known as Nisei, were from the West Coast area. Some were already in the U.S. military service when they were selected for the language school, while others were volunteers from the camps in which American citizens of Japanese ancestry had been interned following the bombing of Pearl Harbor.
According to General Charles Willoughby, chief of intelligence
for General Douglas MacArthur, "the 6,000 Nisei shortened the Pacific war by two years.”
Created by the Savage Chamber of Commerce
1993
Submitted by Chi C.