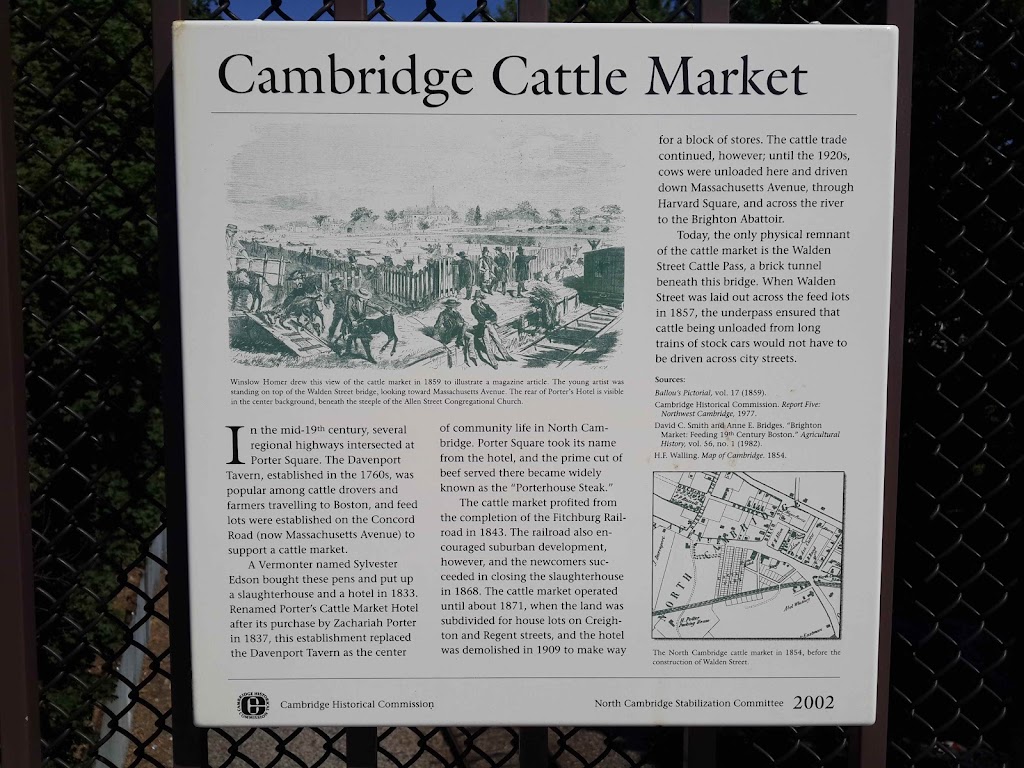 In the mid-19th century, several regional highways intersected at Porter Square. The Davenport Tavern, established in the 1760s, was popular among cattle drovers and farmers travelling to Boston, and feed lots were established on the Concord Road (now Massachusetts Avenue) to support a cattle market.

A Vermonter named Sylvester Edson brought these pens and put up a slaughterhouse and a hotel in 1833. Renamed Porter's Cattle Market Hotel after its purchase by Zachariah Porter in 1837, this establishment replaced the Davenport Tavern as the center of community life in North Cambridge. Porter Square took its name from the hotel, and the prime cut of beef served there became widely known as the "Porterhouse Steak."

The cattle market profited from the completion of the Fitchburg Railroad in 1843. The railroad also encouraged suburban development, however, and the newcomers succeeded in closing the slaughterhouse in 1868. The cattle market operated until about 1871, when the land was subdivided for house lots on Creighton and Regent streets, and the hotel was demolished in 1909 to make way for a block of stores. The cattle trade continued, however; until the 1920s, cows were unloaded here and driven down Massachusetts Avenue, through Harvard Square, and across the river to the Brighton Abattoir.

Today, the only physical remnant of the cattle market is the Walden Street Cattle Pass, a brick tunnel beneath this bridge. When Walden Street was laid out across the feed lots in 1857, the underpass ensured that cattle being unloaded from long trains of stock cars would not have to be driven across city streets.