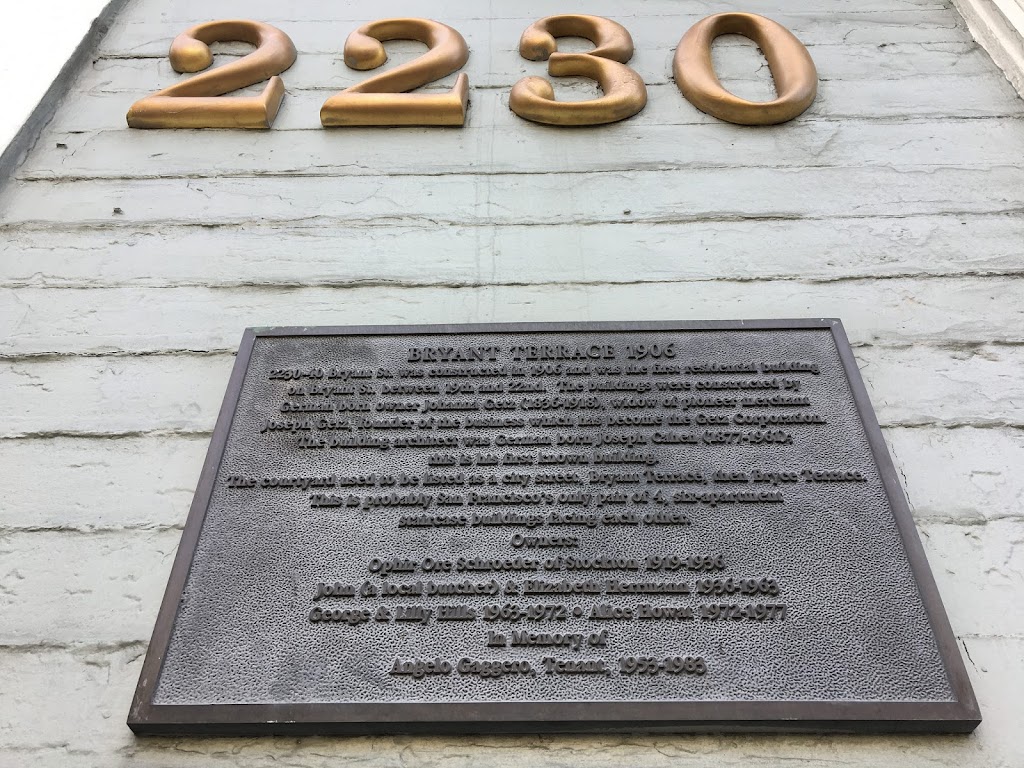 Spotted walking down Bryant Street, near the eastern edge of San Francisco's Mission District, after work. It's a non-official-type plaque, devised by someone devoted to the history of this one property -- a monumental 24-unit apartment complex that presents to the street with a certain utilitarian elegance. (Here's the Google Street View image.)
In San Francisco, the date "1906" commands attention. On April 18 of that year, a powerful earthquake struck the region and destroyed much of the city. Then a fire (and misguided demolition efforts) swept through both wrecked neighborhoods and areas that had survived the quake intact. Photos of the district surrounding this location, Bryant between 20th and 21st streets, show the fire spared this neighborhood though many buildings were badly damaged.
A couple of interesting points about the plaque: City records suggest that the buildings here were actually built in 1905, not 1906. If that's true, they went through the earthquake. Impressive.
And second: The same city records -- the Planning Department database -- show that this is not, as the plaque says, the first residential building on Bryant between 19th and 22nd. There's an 1895-vintage Queen Anne, for instance, on the next block to the south.
(Why does the plaque disagree with the documentary history? Well, maybe it's a case of the collective memory of past tenants and owners colliding with what got wound up in more official maps and files over the years.)
In any case -- here's the text:
BRYANT TERRACE 1906
2230-40 Bryant St. was constructed in 1906 and was the first residential building on Bryant St. between 19th and 22nd. The buildings were constructed by German born owner Johanna Getz (1836-1918), widow of pioneer merchant Joseph Getz, founder of the business which has become the Getz Corporation. The building architect was German born Joseph Cahen (1877-161); this is his first known building. The courtyard used to be listed as a city street, Bryant Terrace, then Bryce Terrace. This is probably San Francisco's only pair of 4, six-apartment staircase buildings facing each other.
Owners:
Ophir Ore Schroeder of Stockton 1919-1936
John (a local butcher) & Elizabeth Herrmann 1936-1963
George & Lilly Hills 1963-1972
Alice Howat 1972-1977
In Memory of Angelo Gaggero, Tenant, 1953-1983.
Submitted by Dan Brekke