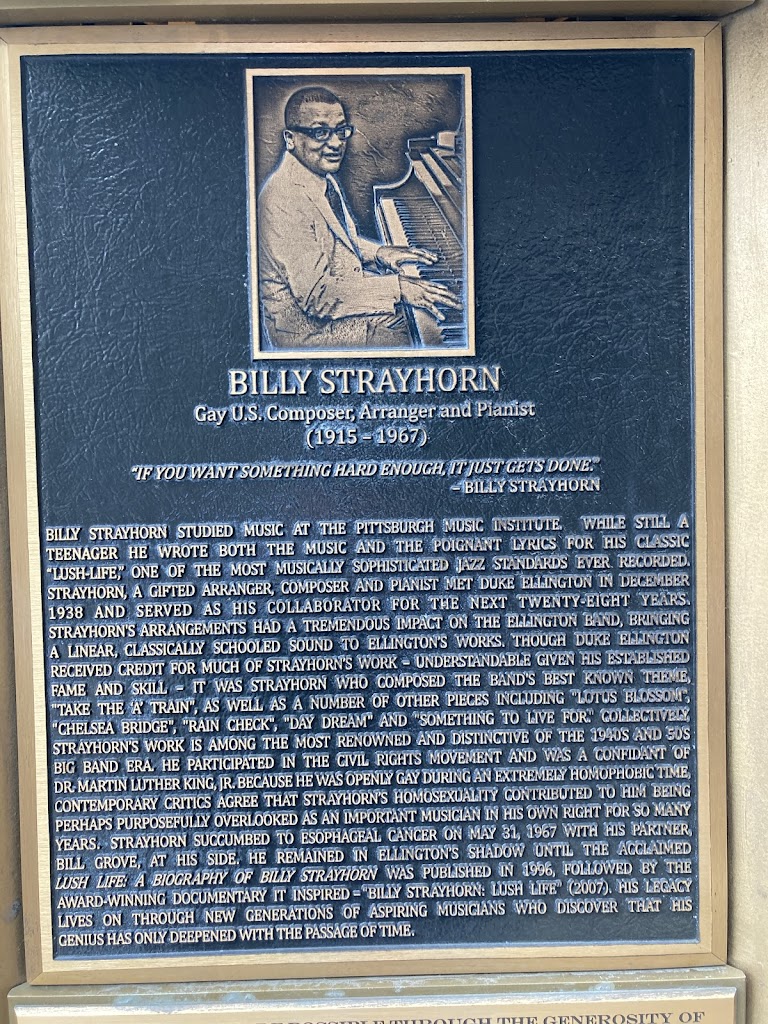 Billy Strayhorn
Gay U.S. Composer, Arranger and Pianist
(1915-1967)
“If you want something hard enough, it just gets done.”  —Billy Strayhorn
Billy Strayhorn studied music at the Pittsburgh music Institute. While still a teenager he wrote both of music and the poignant lyrics for his classic “Lush-Life” one of the most musically sophisticated jazz standards ever recorded. Strayhorn, a gifted arranger, composer and pianist met Duke Ellington in December 1938 and served as his collaborator for the next 28 years. Strayhorn’s arrangements had a tremendous impact on the Ellington band, bringing a linear, classically schooled sound to Ellington‘s works. Though Duke Ellington received credit for much of Strayhorn’s work – understandable given his established fame and skill – it was Strayhorn who composed the bands best known theme “Take the ‘A’ Train” as well as a number of  other pieces including “lotus blossom,” “Chelsea bridge,“ “Rain Check,” “Daydream“ and “Something to Live For.“ Collectively Strayhorn‘s work is among the most renowned and distinctive of the 1940s and 50s big band era. He participated in the civil rights movement and was a confidant of Dr. Martin Luther King Junior because he was openly gay during an extremely homophobic time. Contemporary critics agree that Strayhorn’s homosexuality contributed to him being perhaps purposefully overlooked as an important musician in his own right for so many years. Strayhorn succumbed to esophageal cancer on May 31, 1967 with his partner, Bill Grove, at his side. He remained in Ellington‘s shadow until the acclaimed Lush Life: A Biography of Billy Strayhorn was published in 1996, followed by the award-winning documentary it inspired - “Billy Strayhorn: Lush Life“ (2007). His legacy lives on through new generations of aspiring musicians who discover that is genius has only deep end with the passage of time.
Submitted by
Bryan Arnold
@nanowhiskers