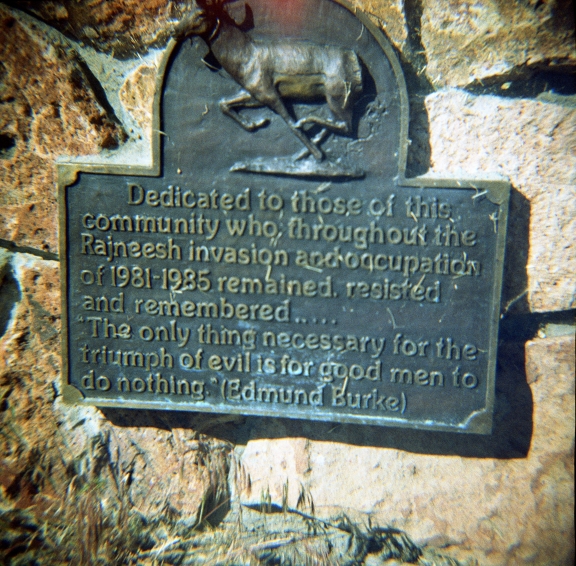 At the base of a flagpole in front of the tiny Post Office in Antelope, Oregon, 97001. This small, nearly non-existent town has apparently had some interesting recent history. The plaque reads as follows:
Dedicated to those of this community who throughout the Rajneesh invasion and occupation of 1981-1985 remained, resisted and remembered…..
“The only thing necessary for the triumph of evil is for good men to do nothing.” (Edmund Burke)

Indian philosopher and mystic Bhagwan Shree Rajneesh had a vision: he would build a Utopian city from the ground up, starting with 64,000 acres of muddy ranchland in rural Oregon.

Purchased in 1981, this expanse was to become both a fully-functional urban center and a spiritual mecca for his followers from around the world.

For this plan to work Rajneesh and his red-clad devotees (known as “sannyasins”) needed autonomous authority with which to construct their paradise.