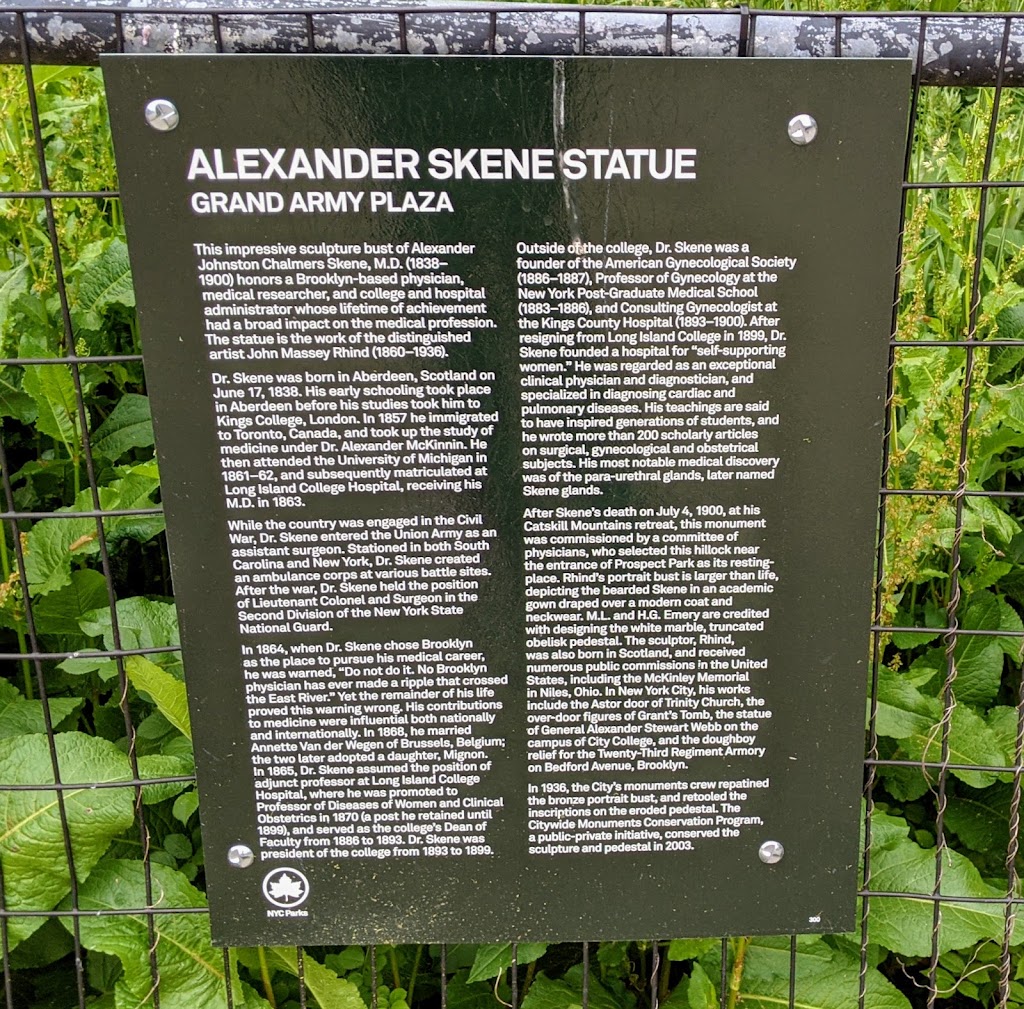 This impressive sculpture bust of Alexander Johnston Chalmers Skene, M.D. (1838 -1900) honors a Brooklyn-based physician, medical researcher, and college and hospital administrator whose lifetime of achievement had a broad impact on the medical profession. The statue is the work of the distinguished artist John Massey Rhind (1860 -1936).

Dr. Skene was born in Aberdeen, Scotland on June 17, 1838. His early schooling took place in Aberdeen before his studies took him to Kings College, London. In 1857 he immigrated to Toronto, Canada, and took up the study of medicine under Dr. Alexander McKinnin. He then attended the University of Michigan in 1861-62, and subsequently matriculated at Long Island College Hospital, receiving his M.D. in 1863.

While the country was engaged in the Civil War, Dr. Skene entered the Union Army as an assistant surgeon. Stationed in both South Carolina and New York, Dr. Skene created an ambulance corps at various battle sites. After the war, Dr. Skene held the position of Lieutenant Colonel and Surgeon in the Second Division of the New York State National Guard.

In 1864, when Dr. Skene chose Brooklyn as the place to pursue his medical career, he was warned, "Do not do it. No Brooklyn physician has ever made a ripple that crossed the East River." Yet the remainder of his life proved this warning wrong. His contributions to medicine were influential both nationally and internationally. In 1888, he married Annette Van der Wegen of Brussels, Belgium; the two later adopted a daughter, Mignon. In 1865, Dr. Skene assumed the position of adjunct professor at Long Island College Hospital, where he was promoted to Professor of Diseases of Women and Clinical Obstetrics in 1870 (a post he retained until 1899), and served as the college's Dean of Faculty from 1886 to 1893. Dr. Skene was president of the college from 1893 to 1899.

Outside of the college, Dr. Skene was a founder of the American Gynecological Society (1886-1887), Professor of Gynecology at the New York Post-Graduate Medical School (1883-1886), and Consulting Gynecologist at the Kings County Hospital (1893-1900). After resigning from Long Island College in 1899, Dr. Skene founded a hospital for "self-supporting women." He was regarded as an exceptional clinical physician and diagnostician, and specialized in diagnosing cardiac and pulmonary diseases. His teachings are said to have inspired generations of students, and he wrote more than 200 scholarly articles on surgical, gynecological and obstetrical subjects. His most notable medical discovery was of the para-urethral glands, later named Skene glands.

After Skene's death on July 4, 1900, at his Catskill Mountains retreat, this monument was commissioned by a committee of physicians, who selected this hillock near the entrance of Prospect Park as its resting place. Rhind's portrait bust is larger than life, depicting the bearded Skene in an academic gown draped over a modern coat and neckwear. M.L. and H.G. Emery are credited with designing the white marble, truncated obelisk pedestal. The sculptor, Rhind,
was also born in Scotland, and received numerous public commissions in the United States, including the McKinley Memorial in Niles, Ohio. In New York City, his works include the Astor door of Trinity Church, the over-door figures of Grant's Tomb, the statue of General Alexander Stewart Webb on the campus of City College, and the doughboy relief for the Twenty-Third Regiment Armory on Bedford Avenue, Brooklyn.

In 1936, the City's monuments crew repatined the bronze portrait bust, and retooled the inscriptions on the eroded pedestal. The Citywide Monuments Conservation Program, a public-private initiative, conserved the sculpture and pedestal in 2003.