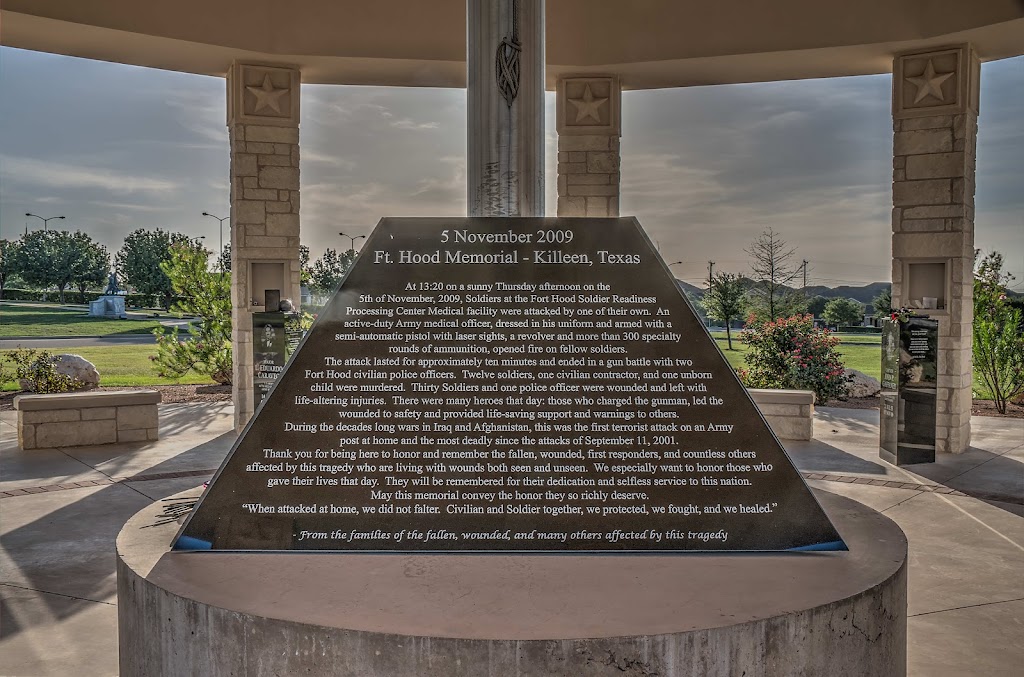 5 November 2009
Ft. Hood Memorial - Killeen, Texas
At 13:20 on a sunny Thursday afternoon on the
5th of November, 2009, Soldiers at the Fort Hood Soldier Readiness
Processing Center Medical facility were attacked by one of their own. An
active-duty Army medical officer, dressed in his uniform and armed with a
semi-automatic pistol with laser sights, a revolver and more than 300 specialty
rounds of ammunition, opened fire on fellow soldiers.
The attack lasted for approximately ten minutes and ended in a gun battle with two
Fort Hood civilian police officers. Twelve soldiers, one civilian contractor, and one unborn
child were murdered. Thirty Soldiers and one police officer were wounded and left with
life-altering injuries. There were many heroes that day: those who charged the gunman, led the
wounded to safety and provided life-saving support and warnings to others.
During the decades long wars in Iraq and Afghanistan, this was the first terrorist attack on an Army
post at home and the most deadly since the attacks of September 11, 2001.
Thank you for being here to honor and remember the fallen, wounded, first responders, and countless others
affected by this tragedy who are living with wounds both seen and unseen. We especially want to honor those who
gave their lives that day. They will be remembered for their dedication and selfless service to this nation.
May this memorial convey the honor they so richly deserve.
"When attacked at home, we did not falter. Civilian and Soldier together, we protected, we fought, and we healed."
- From the families of the fallen, wounded, and many others affected by this tragedy