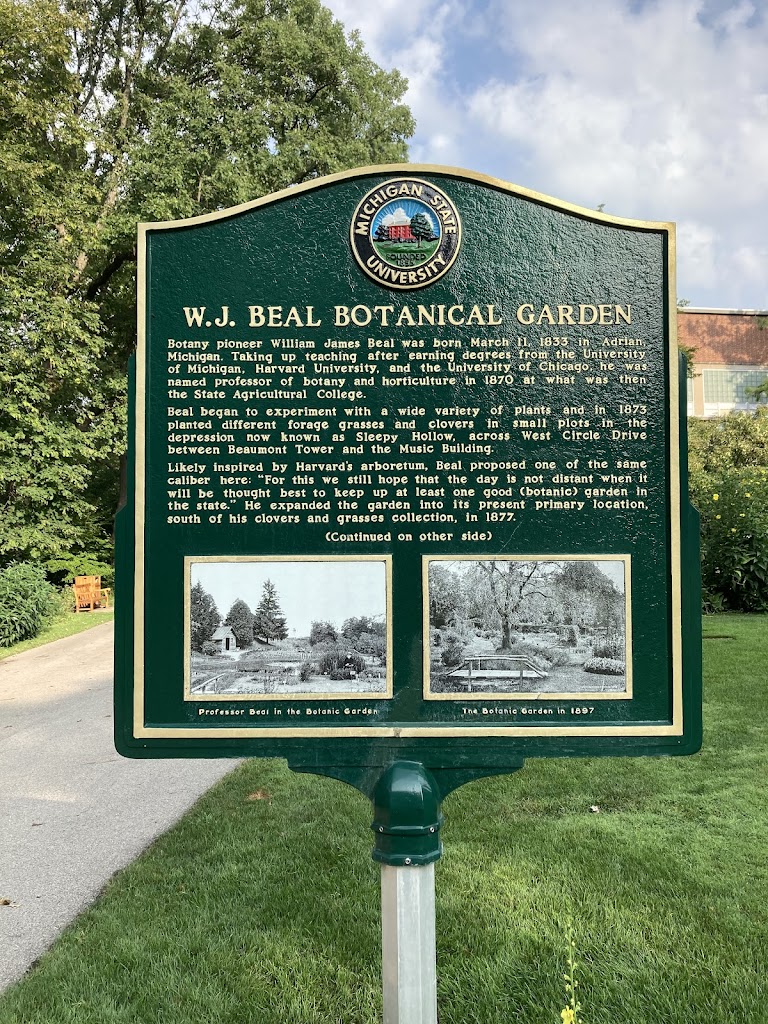 Botany pioneer William James Beal was born March 11, 1833 in Adrian, Michigan. Taking up teaching after earning degrees from the University of Michigan, Harvard University, and the University of Chicago, he was named professor of botany and horticulture in 1870 at what was then the State Agricultural College.

Beal began to experiment with a wide variety of plants and in 1873 planted different forge grass and clovers in small plots in the depression now known as sleepy hollow, across West Circle Dr. between Beaumont tower and the music building.

Likely inspired by Harvard’s arboretum, Beal proposed one of the same caliber here: “For this we still hope that the day is not distant when it will be thought best to keep up at least one good (botanic) garden in the state.“  He expanded the garden into its present primary location, south of his clovers and grasses collection, in 1877.

The newer plot was known as the “Wild Garden,“ although Beal’s reports to the State Board of Agriculture eventually referred to it as “the Botanic Garden.“  It became a popular destination and was the site of Beal’s famous 1878 work to hybridize corn, inspired by the work of evolutionist Charles Darwin.

Beal added soil to the garden through the late 1800s and early 1900s to protect it from flooding of the Ref Cedar River. A stream that flows into the Red Cedar River through the garden and Sleepy Hollow was enclosed and covered to serve the community as an underground sewer.

Beal retired in 1910 and directorship of the garden passed to Professor Henry T Darlington until 1930. It was officially named the W.J. Beal Botanical Garden by the State Board of Agriculture in 1924.

Michigan State College, as MSU was known then, grew rapidly in the post-World War II years, necessitating a new library that displaced aging botany department greenhouses. President John Hannah instructed Campus Park and Planning Director Harold Lautner to reinvigorate the botanic garden to fulfill Professor Beal’s vision for a living laboratory and classroom. Under the leadership of campus landscape architect Milton Baron, the garden was redesigned in its current form of distinctive plant collection beds and plant assemblages along the garden slopes.