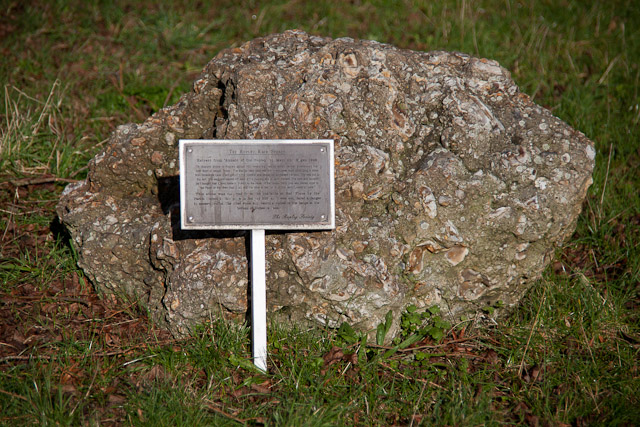 This stone, actually a piece of concrete, lies on the edge of the recreation ground. The plaque reads:- THE ROPLEY RACE STONES Extract from "Annals of Old Ropley" by Marianne Hagen 1929 "A dispute arose in Ropley about 100 years ago as to which farmer possessed the best team of waggon horses. The trial decided upon was this  whichever team could bring a stone from Bridestone Lane (Farringdon) in the shortest time should be accounted the best. This was put to the test. The waggons started off early in the morning at the same moment. The best and second best bought [sic] their stones home in triumph to the music of the horses bells. One was placed close to Hall Place Link on the Petersfield Road, and the other at the corner of Dunstan's (Dunsell's) Lane." The stone was removed from the roadside at Hall Place by the Parish Council to this place in January 2001 as it was considered a danger to modern traffic. The other stone still remains buried in the hedge at the bottom of Dunsell's Lane. The Ropley Society Note: in fact there is no lane named Bridestone Lane. There is however a lane named Brightstone Lane west of Lower and Upper Farringdon Link

© Copyright Peter Facey and licensed for reuse under this Creative Commons Licence .