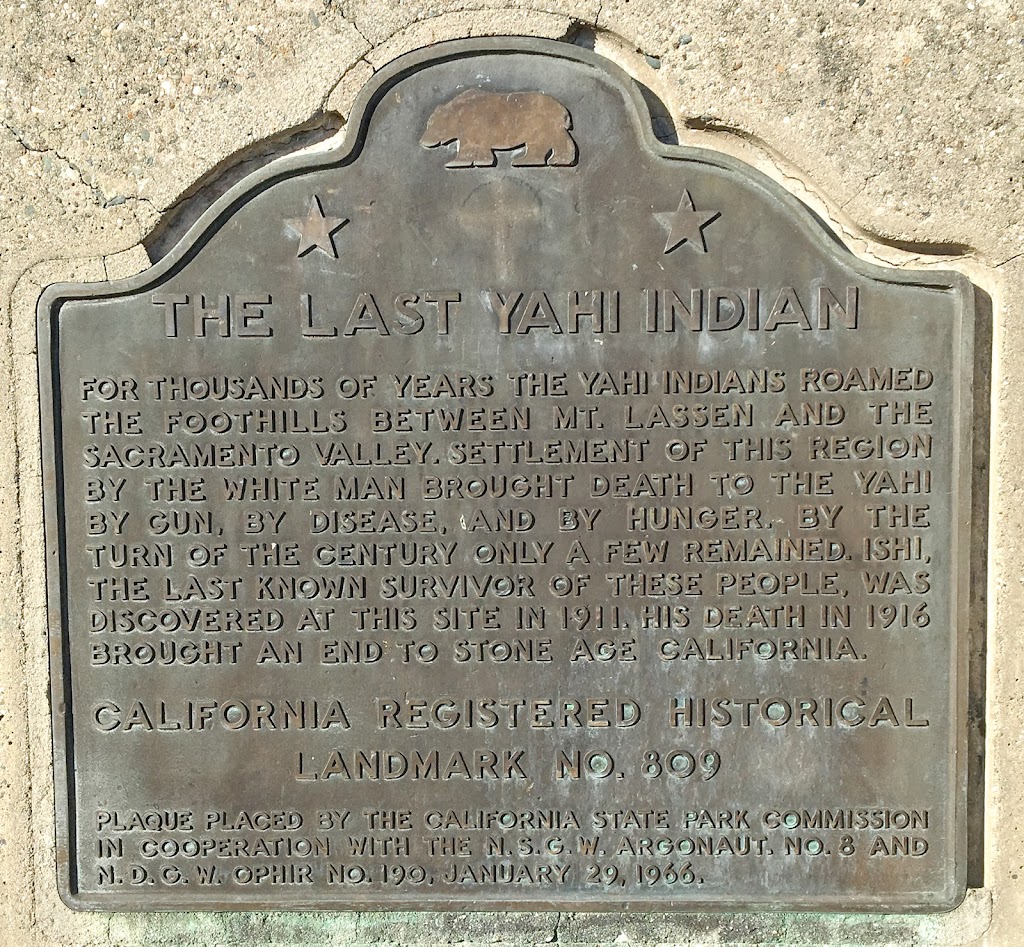 I was in Oroville, California, last month to cover the crisis at the dam nearby that forced evacuation of the city and other communities. I had arrived just as the evacuation order was lifted, and was headed down to one of the main drags to try and find returning townpeople to interview. I passed one of the roadside signs often posted a few hundred feet before you get to a historical marker in California. It had one word: "Ishi." I pulled over at the marker -- something I always try to do.

Ishi is an instantly recognizable name for those who have spent any time in California. Ishi is the legendary last member of his native tribe, the Yahi. In 1911, he was "discovered." Meaning: starved and alone, he gave up his home country in the foothills on the northeastern side of the Sacramento Valley and entered "civilized" California.

I pulled over to read and photograph the plaque. I knew Ishi had emerged from the hills somewhere on the northeast side of the valley, but I had no idea it was here in what is now a suburban-looking neighborhood. It's good to still be surprised by finds like this.

Here's how "Ishi in Two Worlds," the classic account of Ishi and his few years among the people who had made his own extinct, describes the "discovery":

"The story of Ishi begins for us early in the morning of the twenty-ninth day of August in the year 1911 and in the corral of a slaughterhouse. It begins with the sharp barking of dogs which roused the sleeping butchers. In the dawn light they saw a man at bay, crouching against the corral fence -- Ishi.

"They called off the dogs. Then, in some considerable excitement, they telephone the sheriff in Oroville two or three miles away to say that they were holding a wild man and would he please come and take him off their hands. Sheriff and deputies arrived shortly, approaching the corral with guns at the ready. The wild man made no move to resist capture, quietly allowing himself to be handcuffed.

"The sheriff, J.B. Webber, saw the man was an Indian, and that he was at the limit of exhaustion and fear. He could learn nothing further, since his prisoner understood no English. Not knowing what to do with him, he motioned the Indian into the wagon with himself and his deputies, drove him to the county jail in Oroville, and locked him up in the cell for the insane. There, Sheriff Webber reasoned, while he tried to discover something more about his captive he could at least protect him from the excited curiosity of the townspeople and outsiders who were already pouring in from miles around to the the wild man.

"... It should be said that the sheriff's action in locking Ishi up was neither stupid nor brutal given the circumstances. Until sheriff Webber took the unwonted measure of keeping them out by force people filled the jail to gaze through the bars of his cell at the captive."

There's Ishi's entry into our history. He lived for five years after he arrived in Oroville, mostly in the care of Alfred Kroeber and associates at the University of California.

Here's the plaque's text, which is remarkably casual in describing the passing of an age and a people:

For thousands of years, the Yahi Indians roamed the foothills between Mt. Lassen and the Sacramento Valley. Settlement of this region by the white man brought death to the Yahi by gun, by disease, and by hunger. By the turn of the century only a few remained. Ishi, the last known survivor of these people, was discovered at this site in 1911. His death in 1916 brought an end to Stone Age California.