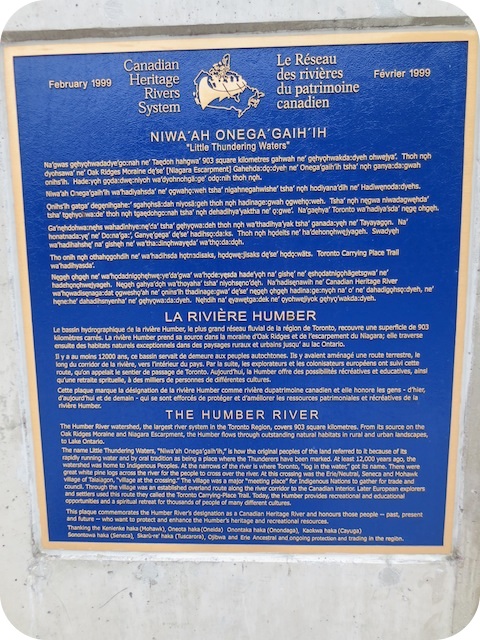 The Humber River watershed, the largest river system in the Toronto region, covers 903 square kilometres. From its source on the Oak Ridges Moraine and Niagara Escarpment, the Humber flows through outstanding natural habitats in rural and urban landscapes, to Lake Ontario.
The name Little Thundering Waters, "Niwa'ah Onega'gaih'ih," is how the original peoples of the land referred to it because of its rapidly running water and by the oral tradition as being a place where the Thunderers have been marked. At least 12,000 years ago, the watershed was home to Indigenous Peoples. At the narrows of the river is where Toronto, "log in the water," got its name. There were great white pine logs across the river for the people to cross over the river. At this crossing was the Erie/Neutral, Seneca and Mohawk village of Taiaiagon, "village at the crossing." The village was a major "meeting place" for Indigenous Nations to gather for trade and council. Through the village was an established overland route along the river corridor to the Canadian interior. Later European explorers and settlers used this route they called the Toronto Carrying-Place Trail. Today, the Humber provides recreational and educational opportunities and a spiritual retreat for thousands of people of many different cultures.
This plaque commemorates the Humber River's designation as a Canadian Heritage River and honours those people - past, present and future - who want to protect and enhance the Humber's heritage and recreational resources.
Thanking the Kenienke haka (Mohawk), Oneota haka (Oneida) Onontaka haka (Onondaga), Kaokwa haka (Cayuga) Sonontowa haka (Seneca), Skaru-re haka (Tuscarora), Ojibwa and Erie Ancestral and ongoing protection protection and trading in the region.