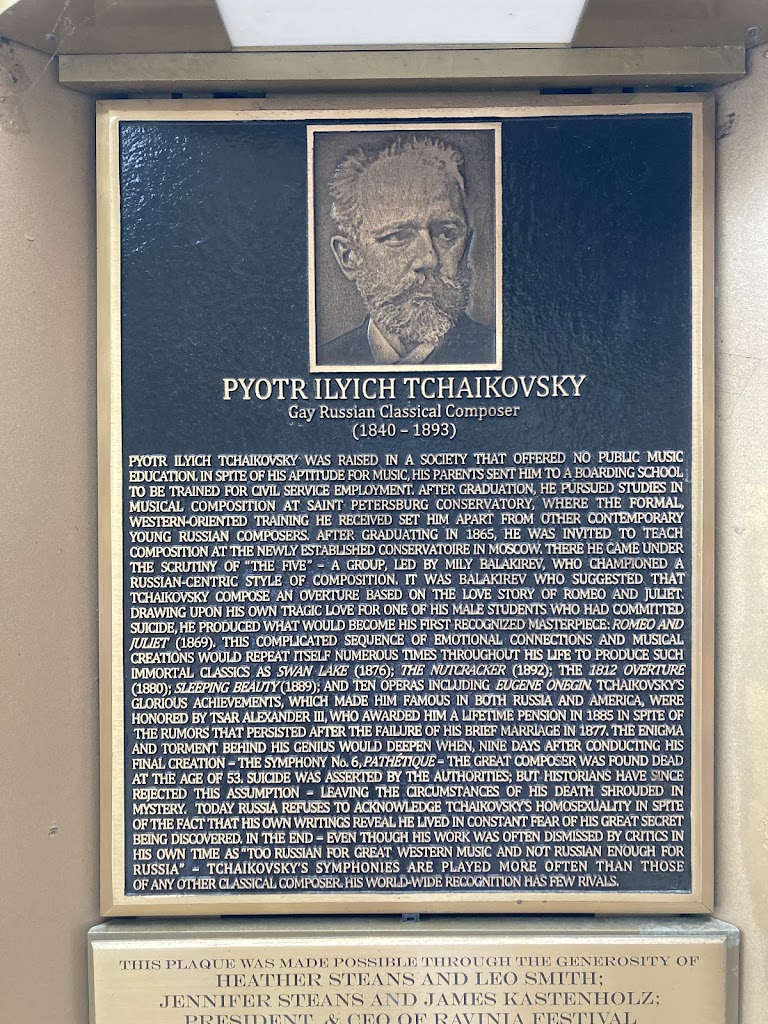 PYOTR ILYICH TCHAIKOVSKY
GAY RUSSIAN CLASSICAL COMPOSER
(1840-1893)
PYOTR ILYICH TCHAIKOVSKY was raised in a society that offered no public music education. In spite of his aptitude for music, his parents sent him to a boarding school to be trained for civil service employment. After graduation, he pursued studies in musical composition at Saint Petersburg Conservatory, with the formal western-oriented training he received set him apart from other contemporary young Russian composers. After graduating in 1865, he was invited to teach composition at the newly established conservatoire in Moscow. There he came under the scrutiny of “the Five“– a group, led by Mily Balakriev, who championed a Russian-centric style of composition. It was Balakriev who suggested that Tchaikovsky compose an overture based on the love story of Romeo and Juliet. Drawing upon his own tragic love for one of his male students who committed suicide, he produced what would become his first recognized masterpiece: Romeo and Juliet (1869). This complicated sequence of emotional connections and musical creations would repeat itself numerous times throughout his life to produce such immortal classics as Swan Lake (1876); the Nutcracker (1892); the 1812 Overture (1880); Sleeping Beauty(1889); and 10 operas including Eugene Onegin.  Tchaikovsky‘s glorious achievements, which made him famous in both Russia and America, were honored by Tsar Alexander III, who awarded him a lifetime pension in 1885 in spite of the rumors that persisted after the failure of his brief marriage in 1877. The enigma and torment behind his genius would deepen when, nine days after conducting his final creation – the Symphony No. 6 Pathetique - the great composer was found dead at the age of 53. Suicide was asserted by the authorities; but historians have since rejected this assumption – leaving the circumstances of his death shrouded in mystery. Today Russia refuses to acknowledge Tchaikovsky‘s homosexuality in spite of the fact that his own writings revealed he lived in constant fear of his great secret being discovered. In the end – even though his work was often dismissed by critics in his own time as “too Russian for great western music and not Russian enough for Russia “– Tchaikovsky’s symphonies are played more often than those of any other classical composer. His worldwide recognition has few rivals.
Submitted by
Bryan Arnold
@nanowhiskers