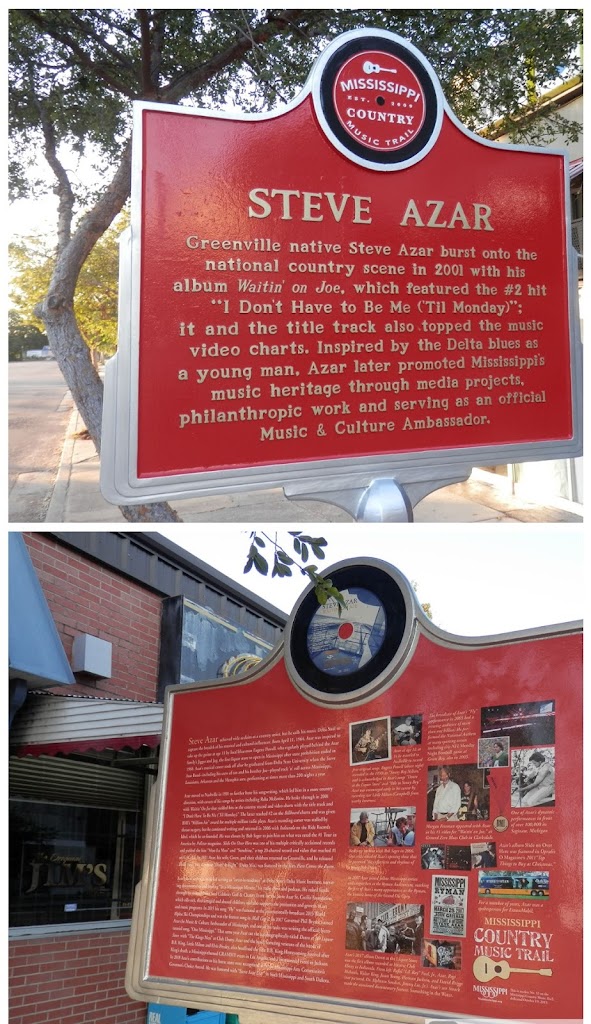 Greenville native Steve Azar burst onto the national country scene in 2001 with his album Waitin’ on Joe, which featured the #2 hit "I Don’t Have to Be Me (‘Til Monday)"; it and the title track also topped the music video charts. Inspired by the Delta blues as a young man, Azar later promoted Mississippi’s music heritage through media projects, philanthropic work and serving as an official Music & Culture Ambassador.(back)Steve Azar achieved wide acclaim as a country artist, but he calls his music Delta Soul to capture the breadth of his musical and cultural influences. Born April 11, 1964, Azar was inspired to take up the guitar at age 11 by local bluesman Eugene Powell, who regularly played behind the Azar family’s Jigger and Jug, the first liquor store to open in Mississippi after state prohibition ended in 1966. Azar’s musical career took off after he graduated from Delta State University when the Steve Azar Band—including his crew of ten and his brother Joe—played rock ’n’ roll across Mississippi, Louisiana, Arkansas and the Memphis area, performing at times more than Azar moved to Nashville in 1991 to further hone his songwriting, which led him in a more country direction, with covers of his songs by artists including Reba McEntire. He broke through in 2001 with Waitin’ on Joe that yielded hits in the country record and video charts with the title track and “I Don’t Have to Be Me (‘Til Monday).” The latter reached #2 on the Billboard charts and was given BMI’s “Million-Air” award for multiple million radio plays. Azar’s recording career was stalled by throat surgery, but he continued writing and returned in 2006 with Indianola on the Ride Records label, which he co-founded. He was chosen by Bob Seger to join him on what was rated the #1 Tour in America by Pollstar magazine. Slide On Over Here was one of his multiple critically acclaimed records and yielded the hits “Moo La Moo” and “Sunshine,” a top 20-charted record and video that reached #1 on GAC-TV. In 2011 Azar, his wife, Gwen, and their children returned to Greenville, and he released Delta Soul, Vol. 1, whose “Doin’ It Right” (Delta Mix) was featured in the film Here Comes the Boom.Azar’s local activities included serving as “artist-in-residence” at Delta State’s Delta Music Institute, narrating documentaries and hosting " In a Mississippi Minute,” his radio show and podcast. He raised funds through his annual Delta Soul Celebrity Golf & Charity Event for the Steve Azar St. Cecilia Foundation, which aids sick, disadvantaged and abused children, and also supports the promotion and growth of art and music programs. In 2015 his song “Fly” was featured at the internationally-broadcast 2015 World Alpine Ski Championships and was the feature song in Mall Cop 2. In 2017 Governor Phil Bryant named Azar the Music & Culture Ambassador of Mississippi, and one of his tasks was writing the official bicentennial song, “One Mississippi.” That same year Azar cut the autobiographically-titled Down at the Liquor Store with “The Kings Men” at Club Ebony. Azar and the band, featuring veterans of the bands of B.B. King, Little Milton and Elvis Presley, also headlined the first B.B. King Homecoming Festival after King’s death, a Mississippi-themed GRAMMY event in Los Angeles and a bicentennial event in Jackson. In 2018 Azar’s contributions to his home state were recognized with the Mississippi Arts Commission’s Governor’s Choice Award. He was honored with “Steve Azar Day” in both Mississippi and South Dakota.