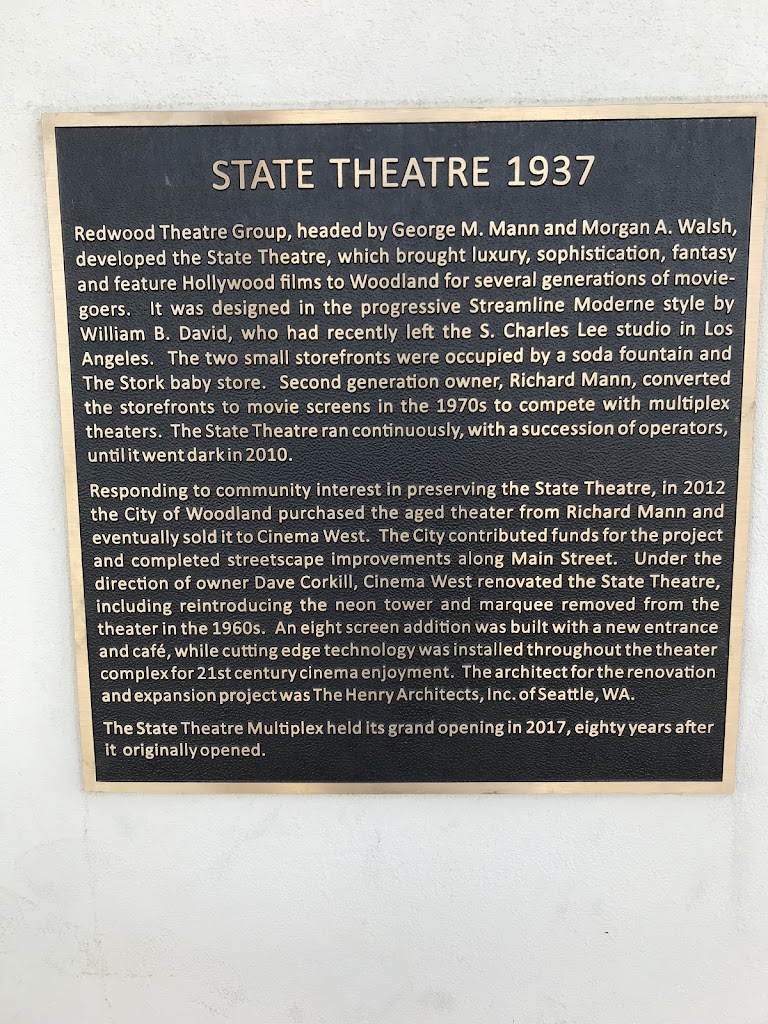 STATE THEATRE 1937
Redwood Theatre Group, headed by George M. Mann and Morgan A. Walsh,
developed the State Theatre, which brought luxury, sophistication, fantasy
and feature Hollywood films to Woodland for several generations of movie
goers. It was designed in the progressive Streamline Moderne style by
William B. David, who had recently left the S. Charles Lee studio in Los
Angeles. The two small storefronts were occupied by a soda fountain and
The Stork baby store. Second generation owner, Richard Mann, converted
the storefronts to movie screens in the 1970s to compete with multiplex
theaters. The State Theatre ran continuously, with a succession of operators,
until it went dark in 2010.
Responding to community interest in preserving the State Theatre, in 2012
the City of Woodland purchased the aged theater from Richard Mann and
eventually sold it to Cinema West. The City contributed funds for the project
and completed streetscape improvements along Main Street. Under the
direction of owner Dave Corkill, Cinema West renovated the State Theatre
including reintroducing the neon tower and marquee removed from the
theater in the 1960s. An eight screen addition was built with a new entrance
and café, while cutting edge technology was installed throughout the theater
complex for 21st century cinema enjoyment. The architect for the renovation
and expansion project was The Henry Architects, Inc. of Seattle, WA.
The State Theatre Multiplex held its grand opening in 2017, eighty years after
It originally opened.