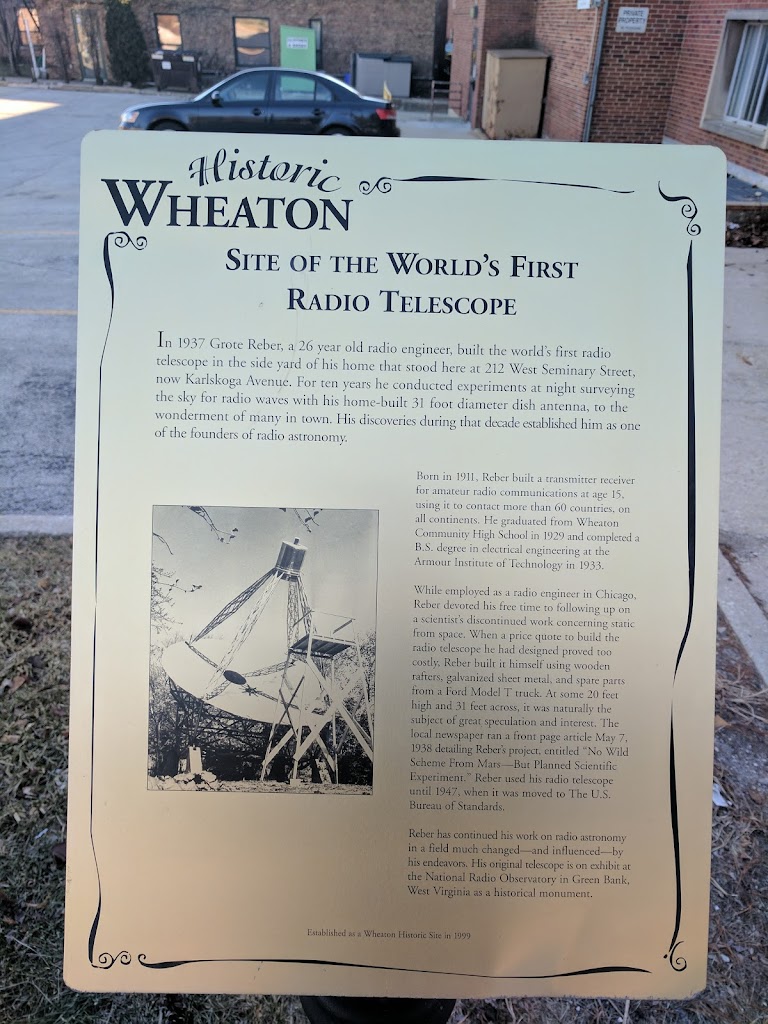 In 1937 Grote Reber, a 26 year old radio engineer, built the world's first radio telescope in the side yard of his home that stood here at 212 West Seminary Street, now Karlskoga Avenue. For ten years he conducted experiments at night surveying the sky for radio waves with his home-built 31 foot diameter dish antenna, to the wonderment of many in town. His discoveries during that decade established him as one of the founders of radio astronomy.

Born in 1911, Reber built a transmitter receiver for amateur radio communications at age 15, using it to contact more than 60 countries, on all continents. He graduated from Wheaton Community High School in 1929 and completed a B.S. degree in electrical engineering at the Armour Institute of Technology in 1933.

While employed as a radio engineer in Chicago, Reber devoted his free time to following up on a scientist's discontinued work concerning static from space. WHen a price quote to build the radio telescope he had designed proved too costly, Reber built it himself using wooden rafters, galvanized sheet metal, and spare parts from a Ford Model T truck. At some 20 feet high and 31 feet across, it was naturally the subject of great speculation and interest. The local newspaper ran a front page article May 7, 1928 detailing Reber's project, entitled "No Wild Scheme From Mars-But Planned Scientific Experiment." Reber used his radio telescope until 1947, when it was moved to The U.S. Bureau of Standards.

Reber has continued his work on radio astronomy in a field much changed-and influenced-by his endeavors. His original telescope is on exhibit at the National Radio Observatory in Green Back, West Virginia as a historical monument.

Subnitted by: Jason Songer
Established as a Wheaton Historic Site in 1999.